A devastating conflict between the defenders of Deepgate and the Heshette tribes has left the city in a precarious position, but the Spine priest-assassins are reluctant to let the civilian population flee. Former Spine operative Rachel Hale and the temple archon Dill are on the run, whilst the fallen angel Carnival has vanished. But, from the pit under Deepgate, a strange mist is rising... 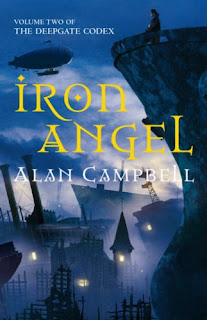 On the other side of the vast eastern ocean, the continent of Pandemeria has served as the battleground between the armies of Hell and those of the surface world, led by Ulcis' brothers. With their brother MIA, the rest of the family dispatches Cospinol, god of brine and fog, and his immortal champion John Anchor to investigate and seal the rent that Carnival and Dill accidentally created, before the world is destroyed.

In Iron Angel, the sequel to Scar Night and the middle volume of The Deepgate Codex trilogy, events take a turn for the Biblical. The armies of Hell are gathering and key characters from the first book are revealed to have major roles to play in the struggle to come. Characters from the first book, most notably Carnival, are unfortunately sidelined, but some of their replacements, like the superbly-realised John Anchor, more than make up for the lack. 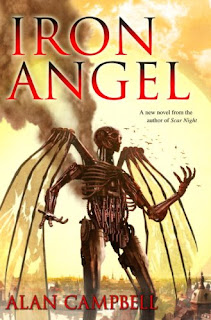 The biggest difference between the two books, and Iron Angel's biggest weakness, is the lack of a milieu to rival Deepgate. A large chunk of the book is set in Hell and whilst it is vividly described, we are firmly in the traditional post-Dante vision of the underworld (with a dash of mid-1980s movie Labyrinth thrown in for good measure) more thoroughly explored by the likes of Gaiman (in the Sandman graphic novels) and it has to be said that there's a bit too much over-familiarity in this sequence. Also, whilst Dill grew a pair at the end of Scar Night and seemed to grow as a character, Iron Angel throws him back into ultra-nervous emo mode and he lost my sympathy and became a figure of pity before the halfway mark of the book. There's a notable lack of focus in the book as well, with the earlier sequence depicting John Anchor's mission, the central Hell section and the conclusion (which opens with an unexpected take on Murder on the Orient Express) not quite hanging together as a cohesive whole, although the three sections are individually compelling.

Things do come together at the end of the book, and Iron Angel's vast final battle redefines the meaning of 'epic', with events culminating with a powerful cliffhanger ending which redeems the weaker sections of the book and leaves the reader eager to press on to the final volume, God of Clocks.

Iron Angel (***½) is a mixed bag which eventually overcomes its problems to deliver a readable and entertaining tale, although the measured pace and rich worldbuilding of Scar Night is sadly missing. It is available now in the UK and USA.
Posted by Adam Whitehead at 20:25