So, they're making a movie based on ASTEROIDS 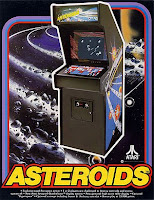 I always felt the narrative was compelling enough to survive the transition to cinematic form.
There. Is. No. Story! Why would you have a 'four-studio bidding war' over this? Why? WHY?

Where will the insanity end? No, wait, we've already been there. But expect to see Uwe Boll's Paperboy, Quentin Tarantino's Pac-Man and Pixar's Frogger on their way in the near future.
Posted by Adam Whitehead at 17:01

They just want the NAME to tell a generic "asteroids" scifi story. They should have picked some novels by Asimov, his space ranger "Lucky Starr" had some adventures in the asteroid belt, too. And the name Asimov is still a seller, but I guess it was cheaper to buy the "Asteroids" name.

The protagonist should be played by Orlando Bloom - he's got the I-have-no-personality-or-depth-beyond-this-brooding-exterior thing down to a tee.

On a more serious note, God of War would make an awesome movie.

It just beggars belief the extraordinary lengths that Hollywood writers and/or movie studios will go to in creating more and more farcical films. It really does blow my mind that there are MILLIONS of novels and short stories out there that could be translated into the cinematic or televisual medium quite well and yet they make shite like this.

And if they are gonna choose video games and board games to make films of, what about King's Bounty? Curse of the Azure Bonds (book also)? Diablo? Heroes of Might & Magic? Shogun (board game or PC game)? Quake? Duke Nukem? Bubble Bobble? Fucking COMMANDER KEEN for Christ's SAKE!!!

You just gotta laugh don't ya?

Sorry meant production houses, not movie studios, though it's their fault for picking up such tripe.

Actually, if you gave Paperboy to Tarantino (rather than Pac Man) I would pay to see that.

This post was hilarious! Way to go and I totally agree.

As for games that should be made into movies... duh! Adventure and single player RPG games! They already have a plot!

A movie based on Quest for Glory, maintaining the humour and the vampire romance thing? Gold!

And now they're making one about the viewmaster - have we morphed into Bizarro Earth?

reminds me of this: