Millions of years hence, the Sun has grown old, bloated and red and is about to go out. In these dying days humanity, now capable of great feats of magic, shares the much-changed Earth with hostile races such as the deodands and pelgranes. This is the vivid setting of Jack Vance's Dying Earth series, four books (now usually published in one volume, Tales of the Dying Earth) which now stand as one of the cornerstones of modern fantasy. 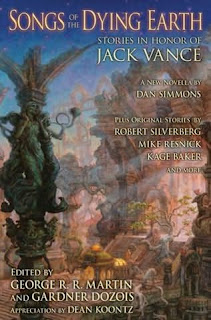 Songs of the Dying Earth is an all-star 'tribute album' by some of the biggest names in modern SF and Fantasy, featuring twenty-three stories set in the Dying Earth setting. With a lot of ground to cover, let's get straight into it:

'The True Vintage of Erzuine Thale' by Robert Silverberg sees a melancholic wine-drinker confronting a problem. An interesting little story, if a tad predictable.

'Grolion of Almery' by Matthew Hughes is excellent. A man seeks shelter at a house and falls into the complex schemes of the house's caretaker, with destructive results. This story throws together elements of humour and horror. The Dying Earth meets Little Shop of Horrors by way of Cthulu. Funny, clever and a great last-minute twist.

'The Copsy Door' by Terry Dowling is likewise superb, featuring the mage Amberlin the Lesser, cursed by a particularly annoying form of magic, inadvertently getting into a contest of wills with other mages to unexpected results.

'Caulk the Witch-Chaser' by Liz Williams is somewhat unremarkable. A witch-chaser is employed to hunt down some witches in the marshes, but is unhappy with the process by which he was hired. Williams tries to hit the Vancian mode of speech and doesn't quite nail it. That said, the end is nicely dark and twisted.

'Inescapable' by Mike Resnick sees city watchman Pelmundo become bewitched by a woman and end up getting in over his head. This is another strong story and the ending will likely provide long-term readers of the Dying Earth series with a big grin.

'Abrizonde' by Walter Jon Williams is a highlight, featuring the besieged castle of Abrizonde and charting the fortunes of the hapless Vespanus who is trapped within. This is a great story, tense and dramatic with an amusing finale.

'The Traditions of Karzh' by Paula Volsky sees Farnol of Karzh become of age and stand ready to inherit his family home and fortune, but his lack of magical aptitude is a disgrace to the family's honour. His attempt to make amends leads to a dubious encounter with a particularly persistent pelgrane. An extremely good story, with a slice of dark vein and a particularly satisfying conclusion.

'The Final Quest of the Wizard Sarnod' by Jeff VanderMeer is the weakest story in the collection. The writing is turgid and does not flow well at all, and the failure of the story is all the more irritating as it attempts to resolve the T'sais/Sarnod story from The Dying Earth itself. Disappointing.

'The Green Bird' by Kage Baker similarly invokes Cugel the Clever, the antihero of the second and third Dying Earth books, but to a far more successful end. Cugel learns of the existence of a bird whom has memorised many key spells and sets out to capture it, with typically disastrous results. 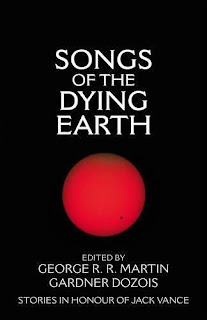 'The Last Golden Thread' by Phyllis Eisenstein is one of the more interesting stories in the book. The author does not attempt to match the Vancian mode of speech, and instead tells a melancholic and quiet story about ambitions and desires at the end of time. Affecting and thought-provoking.

'An Incident at Uskvosk' by Elizabeth Moon is a funny little story about a day at the races which ends up being a lot more complicated than it should be.

'Sylgarmo's Proclamation' by Lucius Shepard sees Thiago Alves and Derwe Coreme join forces to track down the troublesome Cugel, with amusing results. A solid if not outstanding story.

'The Lamentably Comical Tragedy (or The Laughably Tragic Comedy) of Lixal Laqavee' by Tad Williams is another highlight of the book. Fake wizard Lixal Laqavee, having tired of his life as a conjurer in a circus, decides to learn some real magic, with troublesome results that force him into a highly hazardous alliance with a deodand of dubious reliability and a ravenous hunger for human flesh. Simply put, brilliant.

'Guyal the Curator' by John C. Wright sees Manxolio Quinc, Chief Invigilator of Old Romarth, investigating the arrival of a stranger in the city suffering from amnesia. Their investigation of his origins sees them running afoul of the ill-tempered titan Magnatz. This another successful story, with a startling ending. The only problem with this tale is that the Dying Earth seems to have unexpectedly re-acquired its Moon (which, as previous stories had established, had wandered out of Earth's orbit millions of years earlier).

'The Good Magician' by Glen Cook reacquaints us with Ildefonse the Preceptor, Rhialto the Marvellous and the rest of their ill-assorted circle of allied mages. An amateur wizard, Alfaro, stumbles across a long-held secret which threatens the stability of the Dying Earth. I must admit that whilst the story here is fine, the writing is not very strong and the story is overlong.

'The Return of the Fire Witch' by Elizabeth Hand sees 'good' witch Saloona Morn recruited by her neighbour Paytim Noringal on a mission of wanton slaughter and destruction, to Saloona's distress. This is an oddball story, quite interesting and well-characterised, but one where the author's point seems to have gotten lost in the writing somewhere.

'The Collegeum of Mauge' by Byron Tetrick sees young Dringo joining a magical college to seek out his missing father. The story is quite good, twisting and turning as it goes and with an open-ended conclusion that could be quite interesting to follow up on one day.

'Evillo the Uncunning' by Tanith Lee is another highlight of the collection, as the young orphan Evillo decides to venture into the wilder world and seek his fortune, soon becoming an ally of the sentient snail Khiss along the way. The story is quite bonkers, even by Dying Earth style, complete with a recurring story point highly reminiscent of a recurring storyline in Family Guy (seriously). It's also brilliantly funny.

'The Guiding Nose of Ulfant Banderoz' by Dan Simmons is the longest story in the collection, a rich, detailed novella which sees Shrue the Diabolist allying with the redoubtable Derwe Coreme to find the greatest library in all the world, aided by a demonic entity known as KirkriK and involving a lengthy airship chase. Possibly the best story in the book, given room to breathe by its length, Simmons knocks it out of the park with a story that is funny, tender and dramatic by turns.

'Frogskin Cap' by Howard Waldrop is, on the other hand, the shortest story in the collection, a short mood piece with some funny lines and a lack of mortal peril.

'A Night at the Tarn House' by George R.R. Martin sees several folk of mixed repute take shelter at the inn known as the Tarn House (known for its hissing eels) for the night, only for total mayhem to result. GRRM, in only his second non-Song of Ice and Fire-related piece of fiction written in fifteen-odd years, delivers a characteristically sharply-characterised piece laden with very dark humour and a thought-provoking final line.

'An Invocation of Incuriosity' by Neil Gaiman is a coda not just to the collection but to the whole Dying Earth universe. So, what happens when the Sun finally does go out? Gaiman delivers the haunting answer.

Songs of the Dying Earth (****½) is an exceptionally strong collection, a rich and sumptuous banquet of tales from the end of time. The weak links here are not enough to dilute the impact of the best stories in the collection, and the best stories are thought-provoking, memorable and sharply funny. The book is available now from Subterranean Press in the USA and will be published by HarperCollins Voyager in the UK on 1 October 2009.
Posted by Adam Whitehead at 14:22

I've been curious about this collection since receiving it a few months ago, but I'm unfamiliar with Vance's work.

Would it be a good place to get introduced to his world?

I think so, there are a few bits and bobs that would resonate better if you've read the originals, but I think the collection stands alone.

I'm still waiting for my signed edition to turn up. Glad to read the review - it sounds like a great collection.

I agree with the complaint it is just a collection of summaries and thoughts though. It's a bit like trying to review a 23-course banquet in individual detail. I only really had enough space to give some impressions and then move on, otherwise it would have been the longest review I've ever done.

That said there are a few more thoughts I should have put in, such as the way the stories are arranged to build up to Neil Gaiman's finale. Nothing like a mosaic novel, but certainly a building sense of time passing and the unavoidable End approaching, particularly through the last few stories as the Sun's condition worsens. That was quite interesting and well-done.

I appreciate your review here. I felt the length and depth of the review was well-done and very appropriate, given the magnitude of the undertaking.

I spoke with a few of these authors at Worldcon (as I unabashedly solicited their signatures for the collection), as well as Dozois and GRRM. Without exception, they seemed to have very much enjoyed contributing to the collection, were excited about its release, and happy with the Subterranean Press publication / product.

I must also mention how impressed I am with the pen and inks that accompany each of the stories done by Tom Canty.

I just received my "numbered" copy of SotDE. But Im confused.

There were 500 numbered and 26 lettered. But my copy doesn't have a number, it has 2 letters, which I don't understand.

But I have a much, much bigger concern.

I have carefully examined the signature pages under very bright light and a strong magnifying glass. The signatures don't look like the result of ink flowing from actual pens in my opinion. And the signatures that superficially look like they were signed with a classic blue ink ballpoint pen left absolutely no impressions in the paper. Even a light touch with a ballpoint compresses the paper a little.

Has anyone else received their signed copies? If you purchased a numbered copy, did yours have an actual number or a combo of letters? What do you think of the signatures? I have other works signed by many of these authors so I know that the signatures were authentic at some point. But I think my signature pages were printed and never actually in their hands.

I can tell you that I signed all of the ones they sent me -- hundreds of sheets. And the signatures of the other people on the same page as mine looked genuine to me. They varied considerably, as did mine.