The city of Deepgate is suspended by chains over a vast abyss. At the bottom of the abyss dwells Ulcis, the fallen god, who collects the souls fed to him by the priests of Deepgate to forge a new army of the dead, an army which will break open the gates of heaven and end the damnation of humanity. For three millennia the newly-dead have been given to Ulcis, and the time of reckoning draws nigh. 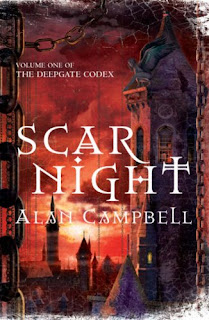 In Deepgate the destinies of several characters become entwined. Dill is the last battle-archon in the service of the temple, an angel who doesn't know how to fly. A failed assassin, Rachel, is ordered to train him in the ways of war. Meanwhile, a fallen angel named Carnival haunts the city, feasting on the souls of the innocent on every night of the new moon: Scar Night. A scavenger named Mr. Nettle believes she has taken his daughter, Abigail, and seeks revenge. In the temple itself ancient secrets are being kept, and Presbyter Sypes and the master poisoner Devon separately find themselves in possession of the knowledge that could destroy the city forever, or save it from oblivion.

Scar Night is the first novel in the Deepgate Codex trilogy, which continues with Iron Angel and the recently-released God of Clocks. In writing style it comes across as a mash-up between China Mieville, Neil Gaiman, steampunk and a particularly good Planescape D&D campaign, mixing up styles and ideas with wild abandon. Deepgate itself is a fascinating location, built on immense chains stretching across the abyss with wooden districts suspended by ropes and pulleys which occasionally and spectacularly fail. Travel outside the city across the hostile Deadlands, filled with heathen tribes, is only possible by airship. There's no doubt that Campbell has constructed a superbly interesting world here. 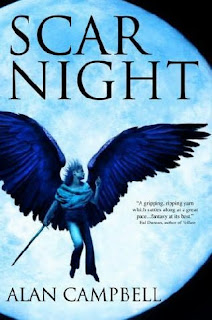 Characterisation is also strong, with the motives and rationales for the protagonists ('heroes' being very definitely the wrong word) all convincingly worked out. However, whilst they are set up very strongly, character development is perhaps a little weak. With the exception of Carnival and Dill, very few of the characters seem to learn much from their experiences and don't change a great deal over the course of the narrative. That said, we are only one-third of the way through the story here and there is no doubt more to come.

The only other criticism that comes to mind is that the book starts fairly slowly as we are introduced to the world. Campbell ratchets up the tension and he has a gift for descriptive prose, but we could perhaps have cut to the chase a little sooner. However, this starting section is also packed with great little worldbuilding and character touches and there is a satisfyingly macabre sense of humour explored more during this opening sequence as well, so it is hard to criticise it too much on that level.

Scar Night (****) is a first novel brimming with confidence, verve and style. It is available from Tor UK and from Bantam Spectra in the USA.
Posted by Adam Whitehead at 16:57

Well done. I read Scar Night last year and thought it was gothic fantasy at its best and most depraved. I just picked up Iron Angel so hopefully that lives up to the same standard.

I liked this, but not enough for me to put Iron Angel on my must-buy list. I did however read the latter recently, and will be picking up God of Clocks much sooner, because it's a step up. I won't give much away, but you're in for a surprise, because whereas Scar Night is a reasonably normal, if twisted, urban fantasy setting, Iron Angel really wanders off into the undergrowth.
Thinking about it now, it's a bit like a manic-depressive Steph Swainston. At least that's the best comparison.

Anyway, off subject a bit but eh.