The Six Duchies are troubled by internal strife. King Shrewd's eldest son and heir, Prince Chivalry, has fathered an illegitimate son. Riven by guilt and controversy, Chivalry abdicates his position and goes into into exile. His son, Fitz, is raised in Buckkeep and tutored in the ways of becoming an assassin. For King Shrewd, Fitz is a weapon he can use to further the cause of his kingdom. But all Fitz wants is a home and a place to belong. 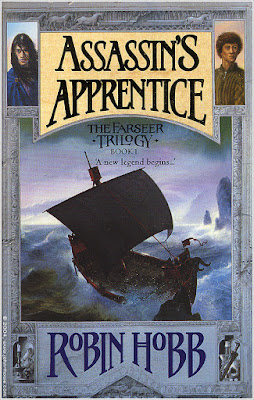 Assassin's Apprentice, originally published in 1995, is the first volume in The Farseer Trilogy, the first of nine books focused on the character of Fitz and also the first book in a sixteen-volume series entitled The Realm of the Elderlings. For a book that launched an enormously successful series, it is relatively small-scale and restrained.

This is traditional epic fantasy, but one that is slanted a little from the standard. It's medieval faux Europe, but the land of the Six Duchies is based on Alaska (albeit a slightly warmer one) and the neighbouring Mountain Kingdom is more inspired by Tibet. There are existential threats - the Red Ship Raiders who ravage the coastline and the threat of civil war - but for the most part these are kept firmly in the background. Assassin's Apprentice is primarily the coming of age tale of FitzChivalry Farseer as he grows up, gains allies, masters the art of the assassin and encounters two forms of magic: the Skill, a form of telepathic communication and control, and the Wit, a bond of empathy with animals.

Robin Hobb's greatest strength is her deft hand with charaterisation and her naturalistic way of presenting the world. Her greatest weakness is a tendency to meander, to have characters sitting around talking about the plot rather than getting on with things and taking a hundred pages to do what a more concise author would do in ten. These weaknesses manifest much more strongly in the later volumes of the series, however. Assassin's Apprentice is, at 480 pages in paperback, relatively short and breezy by Hobb's standards with both a strong character focus and clarity of storytelling. 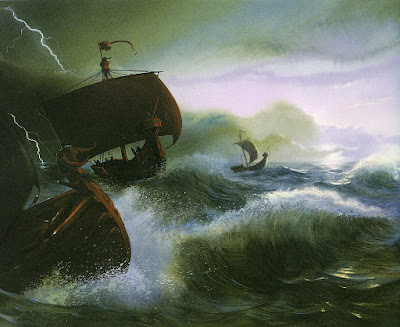 Much of your enjoyment of these books relies on your engagement with the main character, Fitz. Fitz is an introverted, introspective young man who spends a lot of time reacting to events rather than taking decisive action (this changes in later novels, in which he is a lot less passive). This can be frustrating, but it is also realistic: Fitz occupies a place less than nobility but more than being a peasant, and this dichotomy leaves him isolated and almost friendless, his position in the world uncertain and unreliable. It is only towards the end of the volume, when he visits the Mountain Kingdom and encounters people less concerned with rank and pomp, that he is able to come out of his shell a little. As it stands, Fitz is a mildly engaging but far-from-compelling central character. However, he does serve as an effectively unreliable narrator: the further things and events are from Fitz's perspective, the less reliable they are. This serves to upset reader expectations several times over the course of the trilogy. It's not exactly Gene Wolfe, but it is an effective way of getting the reader to share in Fitz's biases and ignorance before presenting them with the truth of events later on.

Hobb is a superior prose writer and a gifted communicator of emotions and atmosphere. Although it's not a primary focus of her writing, she is also a good writer of horror: the Forged, people with their morals stripped away to be turned into monstrous echoes of their former selves, are a truly disturbing fantasy creation. In terms of politics she stumbles a little. Concluding events in the Mountain Kingdom are highly implausible and the way that Fitz escapes retribution for the events people genuinely believe that he has committed is extremely unconvincing. Fitz should be dead three times over before the book ends and the fact he isn't stretches the suspension of disbelief to the breaking point.

But there's also a lot to enjoy here. Fitz's tortured upbringing, his relationship with Burrich and Chade, and his punishing tutelage under Galen are all vividly (and sometimes painfully) described. The Red Ship Raiders are an intriguing enemy and the Forged a horrifying creation. Certainly the novel leaves one wanting to move onto the sequel, Royal Assassin.

Assassin's Apprentice (****) is thus a conflicted book: extremely well-written with a interesting backdrop and a terrific atmosphere, but with a plot that is a bit start-stop and political intrigue that is rather undercooked. But in terms of emotional engagement and its use of an unreliable narrator, Hobb is a formidable writer. The novel is available now in the UK and USA.
Posted by Adam Whitehead at 11:36

I didn't know you've never reviewed these books on here before, nice! Will you be doing the rest as well? I'm interested to see what you think about how the series evolves

I'm really excited that you are reviewing these. They are probably next up on my pile to pick up. Will you be finishing out the series?

This is the first time I've somewhat disagreed with one of your reviews (I think it is a 4.5+ book). Hope you enjoy the rest of the series.

All 16, eventually. But it may take a few years. I'll need to change them up with other things in the meantime.

I picked this up after your article on "The Realm of the Elderling" in your Epic Fantasy Serie, thanks a lot for pointing it out! Just finished the sequel, and you are right, Hobb could be more concise at time, I am a bit weary in diving into the third book immediatly, it being nearly 900 pages! A great read nevertheless.