A few months ago, Gollancz confirmed that Scott Lynch's The Thorn of Emberlain - the fourth book in his excellent Gentleman Bastard series - was a lock for release on 22 September this year. However, it is now looking less likely that the book will hit that date. 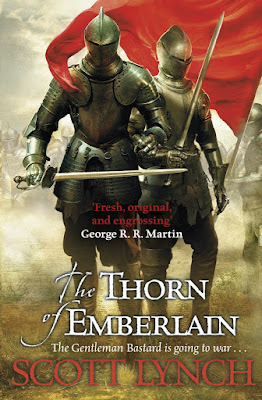 The book was recently pulled from Amazon UK and replaced by a 2018 placeholder, whilst the American edition of the novel has never been listed at all.

It might be that there has been some mix-up with the schedules, or that Bantam was unable to go to print that quickly and has now convinced Gollancz to delay until they are also ready. But so far no official explanation has been given for the book being pulled. If it has been delayed, it certainly won't be until 2018. Based on Scott's comments about how the book was coming together, I suspect (and hope) it will be more moderate delay until early 2017 at worst.

More news as soon as we get it.

UPDATE: Scott Lynch has confirmed that the book will not hit its release date, citing delays stemming from a move of house and writing space. He confirms that the current placeholder dates are not accurate and a more realistic date will be announced soon.
Posted by Adam Whitehead at 21:39

Goddamnit. I'm tired of waiting. The third one was so mediocre it hurt, but I'm willing to give the series another chance.

It was only bumped from July to September to back off of his cross-country move so that touring wouldn't be a problem, right? So yeah...seems more likely to be publishing malarkey than further editing.

I work at a bookstore and spoke to the distributor regarding our order for the title. They confirmed that it has been delayed at least until fall 2017, even though many websites (including our publisher-integrated software) haven't updated their listing for it.

I asked Scott on Twitter if he had an update for US publication. He said that it will be essentially the same as UK, which is great news.

Sad to see another delay, but it's coming.

Too bad but not really big news. With all his health problems it is good that he can even write. One more book that will not be coming out soon. Thank God for Brandon Sanderson.