Hawkins, Indiana, 1983. Four young schoolboys spend their time watching movies, playing Dungeons and Dragons and avoiding bullies. One of the boys, Will, abruptly vanishes. Shortly afterwards, a mysterious girl appears in the woods. Known only as "Eleven" she agrees to help the three boys find their friend, if they help keep her safe. 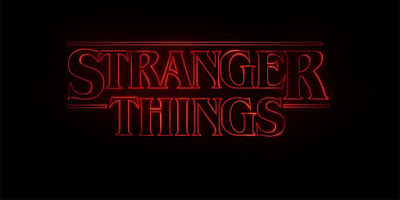 A few moments into watching the first episode of Stranger Things it is entirely possible you will forget you are watching something made in 2016 and come to believe that the Duffer Brothers have somehow opened a space/time portal to 1983 and gotten their hands on a contemporary TV show that they have spruced up with modern editing and effects. Setting a story in the early 1980s is one thing, but Stranger Things takes a step forward in authenticity by making it feel like it was written and filmed then, with a battery of different techniques used to sell the period detail. It is a remarkable achievement.

It would be, however, all for naught if the show was not well-written and good enough to stand on its own feet. And it certainly is that. Stranger Things takes its cue from the 1980s but is clever enough to use more than just a few tropes and basic ideas. Stretching a single Steven Spielberg or Joe Dante movie idea across eight hours would, no matter how good the plot, result in a badly padded and stretched story. Instead, the Duffer Brothers throw a lot more into the mix. You have a kid-focused storyline reminiscent of The Goonies or E.T., a teenage-focused storyline that seems to be riffing briefly on The Breakfast Club but also every teen horror movie ever (and occasionally even The Evil Dead and John Carpenter's films) and an adult-oriented mystery story riffing more on Close Encounters of the Third Kind (with lightbulbs replacing mashed potato), The X-Files and Twin Peaks. But Stranger Things uses these things as flavourings and touchstones. The story and characters are more than strong enough to stand on their own. 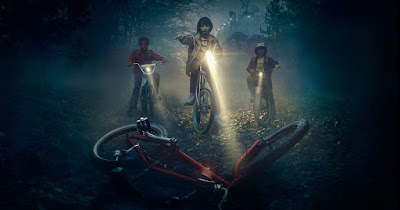 At the heart of the story is the disappearance of Will and the impact this has on his friends, his older brother and his mother Joyce (played with aplomb by Winona Ryder, whose casting provides a neat, authentic tie-in to the decade in question). This ties with themes of childhood, innocence lost, the worst fears of parents and helplessness in the face of an uncaring world. This very relatable theme informs everything else that goes on in the story. Similarly, the discovery of Eleven (12-year-old Millie Bobby Brown providing the breakout performance of the story) and the abuse she suffered at the hands of a coldly uncaring government institution only interested in results and advantages taps into societal beliefs about the innocence of children, the morality of scientific research and notions of corporate responsibility. The complexity of these elements, emphasised by Eleven's Stockholm Syndrome-like relationship with Dr. Brenner (a career-resurging move for Matthew Modine), is an element where Stranger Things differs from its forebears, where the likes of Close Encounters and E.T. ultimately had well-meaning government agents whom the heroes eventually team up with. In Stranger Things the bad guys remain relentlessly bad.

Other elements of the story also evoke traditional tropes but stand them on their head. Nancy (Natalia Dyer) is caught in a love triangle between the cool Steve (Joe Keery) and the shy, more geeky photographer Jonathan (Charlie Heaton) which is so 1980s it hurts, down to Steve's cruel jokes and Jonathan being almost too shy to talk to Nancy but later proving his worth with a baseball bat ordained with nails. However, the show complicates things by showing Steve as having more nuance and depth than it first appears and by giving Jonathan some rather unlikeable traits (like taking pictures of people without their knowledge or consent). Nancy herself is also a more interesting character than many of her inspirations, with her later belligerence and disregard for her own safety (but deep concern over the safety of others) in tackling the monster being quite impressive. Police Chief Jim Hopper (David Harbour) feels a bit under-developed as a protagonist in the opening episodes but he acquires more layers as the series proceeds and the final episode sets his character on a path which is downright intriguing.

The heart and soul of the show, however, belongs to the kids: Brown's Eleven is the absolute Emmy-baiting stand-out, but Mike (Finn Wolfhard), Lucas (Caleb McLaughlin) and Dustin (Gaten Matarazzo) all feel like they've stepped onto the show fresh from trying out for The Goonies. They're funny, intense when needed, act with credible kid logic at all times and play a mean game of Dungeons and Dragons. If Stranger Things's tight eight-episode run is to mostly be lauded (for the tightness of the story and excellent pacing), it's the fact we don't get to see more of the kids' adventures which makes it regrettable. These kids are going to grow up and move onto other projects faster than you can blink. 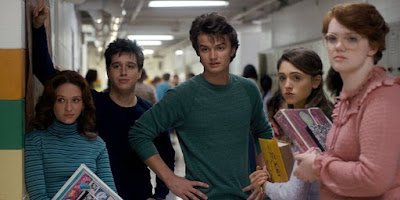 The show also does atmosphere very well, with a terrific synth-driven score adding to the excellent design work and well-judged use of effects, particularly in the creation of the "Upside Down". Everything down to the juxtaposition of sleeping horror and the cheery Christmas spirit in the finale (riffing off both Stephen King and Gremlins) is pitch perfect.

The show is not flawless. The villains are somewhat one-note and it feels a bit of a shame to cast an actor of Matthew Modine's history and stature only to have him not do very much. Most of his character is explored in Eleven's flashbacks and these hint at a more complicated character than the one-note, science-obsessed, amoral person we seen in the present scenes, but it's not really enough to add real depth to the character. In addition, the show sometimes invokves "1980s movie logic" to further the plot and have characters make stupid mistakes. Two characters are standing right next to each other and one somehow manages to disappear without the other noticing. Characters are reticent to share information which would break open the story earlier (and with less bloodshed), even when there is no reason they wouldn't. A few characters, like Jonathan and Will's deadbeat dad, show up, don't do anything and then disappear, all equally pointlessly. And the show feels like it fumbles badly with supporting character Barb (Shannon Purser), whom, despite an excellent performance, it under-utilises badly before dismissing from the story rather abruptly (and, bafflingly, with no real consequences to the story when there should be).

But such flaws are niggling and easily borne. Stranger Things (****½) is nostalgic without being over-indulgent, well-acted throughout and features a brilliant soundtrack and some very good characterisation. It is available to watch through Netflix now worldwide, and a second season is in the planning stages.
Posted by Adam Whitehead at 12:12

I thought this was probably Netflix's best Orignal series to date and rivals a lot of offerings from the like of HBO, ABC and Showtime. If this is where online streaming is headed, count me in.

I agree with your entire post 100%. One caveat, though, Mathew Modine's character could very well come back. It's prime material for sequel like scenes or even episodes (like what's his motivation for how he turned out) and only some of the victims of the creature actually died...