Stephen R. Donaldson has a good claim on being one of the fathers of modern epic fantasy. His novel Lord Foul's Bane, the first in the Chronicles of Thomas Covenant, the Unbeliever, was published in 1977 and is credited (along with Terry Brooks's The Sword of Shannara) with kick-starting the subgenre as we know it. 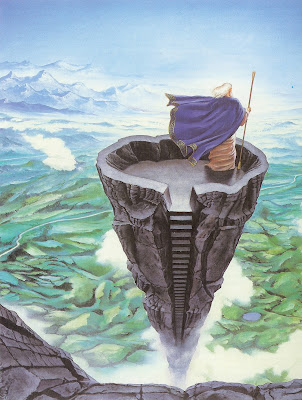 The Thomas Covenant series recently concluded with its tenth volume, but Donaldson is now back with a new fantasy trilogy, dubbed The Great God's War. The first volume, Seventh Decimate, will be a major hardcover release from Berkley Press in the autumn of 2017.

The trilogy will apparently chronicle a magical war and the quest by a prince to find a sorcerous library that holds the key to saving his kingdom. Knowing Donaldson, I suspect things will get radically more complicated than that before the end.

Donaldson has published fantasy outside of the Thomas Covenant series before, with his Mordan's Need duology, as well as a major space opera series, The Gap.
Posted by Adam Whitehead at 20:37

One to avoid for me - I thought Lord Foul's Bane was comically bad. Just ghastly.

Didn't like the Last Chronicles much, mostly because I think the 2nd Chronicles dealt with everything that needed dealing with to a satisfactory conclusion, and I wonder how the Insequent never appeared in any of the previous books if they were that poweful.

Loved Mordant's Need though, and even the GAP series was pretty good.

I would put it in the context of the time period in which it was written. Compared to some of the awesome debuts we are blessed with these days, there was really nothing like it at the time. The works improve considerably after Lord Foul's Bane and taken as one trilogy, or looking at all the books in the universe as one series, they will stand out as one of the great achievements of fantasy. The Gap Series was quite good too, so I would not judge Donaldson purely on Lord Foul's Bane.

Mordant's Need duology is one of my all time favorites. I met him once and naturally had a spastic fanboy stammer. Sigh. The man can write.

Good? The Gap series is probably one of the best sci-fi series of the 20th Century. It's brutal, it's dark, it's complicated, but it's brilliant.