STAR TREK: DISCOVERY will be yet another STAR TREK prequel for no apparent reason

Star Trek is very much a franchise based on the idea on going out into the universe and exploring strange new worlds and civilisations and boldly going where no one has gone before. So that makes the news that CBS's Star Trek: Discovery is going to be yet another redundant prequel a bit perplexing. 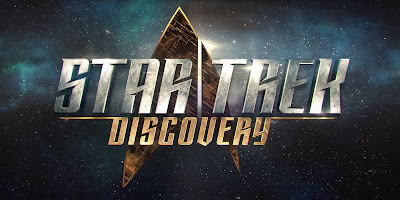 Executive producer and showrunner Bryan Fuller has confirmed that Star Trek: Discovery will be set about ten years before the time of Kirk, Spock and company. It will be a time when the Federation is still exploring new parts of the galaxy, when the Klingons are still hostile and when no-one's heard from the Romulans for ninety years. Other Trek staple species like the Cardassians, Ferengi and Borg are still decades away from being contacted.

Great, I guess? Discovery will be the third Star Trek project in a row - after the 2001-04 TV show Star Trek: Enterprise and the new alternate-continuity movies launched in 2009 - to go back in time and be a prequel or alternate take on stories we've already seen. And it's getting a bit stale, to be honest.

Star Trek is fundamentally about pushing things forward and doing new things. No-one is going to argue that the triple punch of Star Trek: The Next Generation, Deep Space Nine and Voyager (aka the 24th Century series) did exhaust an enormous amount of story possibilities as well as building up some complex continuity over the course of fourteen years, but a new Star Trek series set twenty or fifty years after them - effectively a Next Next Generation - would dispense with such issues as well as tipping its hat at what came before and allowing bold writers to chart out completely different concepts. Bryan Fuller's Star Trek: Federation concept, which depicted a faltering and weak Federation about to collapse and being reinspired by the adventures of a new USS Enterprise commanded by a distant descendant of James T. Kirk, was cheesy as hell but at least it allowed for the possibility of exploring new worlds and doing new things.

This isn't to say that Discovery will be a bad show. I'd be surprised if it was, with the likes of Fuller and Nicholas Meyer writing episodes, and the 13 episode run should allow for tighter storytelling with less filler and space-anomaly-of-the-week episodes. But it's also going to be constrained in its storytelling by concerns over continuity and we know that nothing is really going to get shaken up. It'll be Star Trek boldly going exactly where it's been before and that's really not cutting it anymore. But hopefully, if Discovery is a big success, we'll see another show that takes the much-needed leap forwards into the 25th Century and delivers to us something that really is fresh, interesting and new.

More interesting is the idea that the "main character" will be a lieutenant commander on the Discovery and the main cast focus and dynamic won't be the traditional bridge crew setup. Fuller also confirmed there would be more aliens, the show would feature robots and would also be inspired by a key event referenced in the original series but not shown. The only incident which might apply is the destruction of the USS Farragut, when a young Lt. Kirk escaped from a space monster that killed his captain and most of his crew. However, that seems to contradict Fuller's stance that there won't be any original series characters in Discovery, at least to start with.

Star Trek: Discovery debuts in January 2017 on CBS All Access in the United States, on SPACE in Canada and on Netflix in most of the rest of the world.
Posted by Adam Whitehead at 21:02

Agreed. These are the voyages of the starship Discovery. Going where lots of men have already gone before.

Good analysis. I think the issue with prequels is the technology. Discovery will have better technology than the other shows. Should be set 50-100 yrs after TNG.

Completely agreed. This series should have jumped forward in time. I've said so since Enterprise was first advertised. With this franchise, going backward is a mistake. It's a creative dead-end. No matter how good the story or the stunt casting, I have serious doubts about the longevity of this show. I fear it will be a long time before we get the show we'd prefer to have, too. If this is successful, it will most likely continue. If it fails, it's likely we won't see any Star Trek on TV for another 10 years at least. I intend to see the first episode, but if it doesn't have enough of a hook, I'm not sure I'll give it a further chance.

Is this still supposed to be an anthology-type show? If so, future seasons may be placed elsewhere in the timeline.

Nope. That was a very strong rumour which came along a few months ago but Fuller confirmed that DISCOVERY will follow one set of characters along from season to season.

I think the advantage of the early setting is that TOS had more of a feeling of possibility, of openness, of we-don't-know-what's-around-the-corner sort of thing. By TNG/DS9, it had already acquired a more bureaucratic, the-world-has-been-explored-already feeling. I can see why Fuller might like the greater freedom of the earlier setting. It's true that a few things will be constrained by continuity, but very, very little: most of what's known will be a long way in the future. And I've always felt that there's been plenty of room for more exploration of things closer to Earth - I don't think (at least on TV) they've even really explored all the Federation species, let alone the enemy species. [For instance, I happen to be going through DS9 for the first time at the moment, and have come across mentions of the Tzenkathi (sp?) - a race who apparently the Federation fought repeated major wars against but who are never mentioned outside of one episode (where they're not shown on screen) and a few throw-away lines]. I guess Enterprise was meant to do this, but I ignore that...

So I understand your concern, and I would like to see what happens 'next' at some point, but I think there'll be plenty of space on the canvass for Fuller to make something interesting. OK, so we'll know that the Discovery won't bring about perpetual peace with the Klingons, and if they appear to defeat the Borg we'll know it's only temporary, but if anything I think you gain more in pathos from that then you lose in spoilers...

The problem with this reasoning is that one of the things fans apparently got fed up with was the episodic nature of the franchise, the fact that it had basically become a dumping ground for generic sci-fi stories that had come to seem too routine. They rallied around the fourth season of Enterprise, and the cult-within-a-cult that's Deep Space Nine, because they took deeper cuts into what exactly Star Trek's all about: what we know, what we think we know, and why any of it might still matter. It doesn't matter when the new series is set. Why play with what has clearly become an increasingly precarious guessing game of what is still technologically impossible until centuries from now, when you can merely have fun with the sandbox as it has already been depicted over the years? And how better to do all that than set the next series in an already-established era?

Come to think of it, I wonder how much of this choice may just be a reflection of Fuller's obsession with flamboyant visual aesthetics. Making something in the era of TOS allows for a much more vibrant and interesting (and weird!) visual aesthetic than something in the era of TNG or Voyager would! I can certainly imagine the guy behind Pushing Daisies wanting to get his hands on some Shatner-era-style sets...

I don't agree. Even considering a perfect team of writers, there is the not small issue of producers able to understand and support an original concept. On the other hand, removing the exponential advances (most of them put there just to further a single episode) in technology from the 24th century will return to the basic tenets of Star Trek: tell a story that can live just as well in a non-sci-fi context (see https://www.bu.edu/clarion/guides/Star_Trek_Writers_Guide.pdf).

Personally I really enjoyed the first season of ST Enterprise, until they ruined it all with the temporal war. Remove the technobabble and keep to the character rich stories, with people that solve real problems with the sparse resources at their disposal, using brain power and guile, not motorcycles and time altering teleporters. Return to the Star Trek of underdog humans trying to maintain their humanity in the face of overwhelming odds and move away from the various incarnations of the Human Empire that Americans seem to become fonder and fonder of.

Working within bounds is not as limiting as it seems, instead it fosters creativity from both author and consumer.