Fantasy roleplaying! A bunch of friends create characters - wizards, elves, thieves, dwarves, sorcerers and what have you - and make their way through a vivid world created and controlled by the Dungeon Master Gamemaster. Various attempts have been made to capture the fun of roleplaying and put it on the screen, but they've largely ended up being a bit poor. 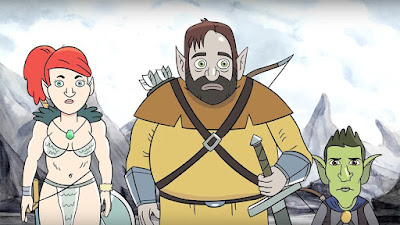 HarmonQuest takes a different tack by combining fantasy roleplaying with improvisational comedy in the vein of Whose Line Is It Anyway? Just typing that makes me realise how blinding obvious an idea it is and why no-one thought of it years ago and cashed in. HarmonQuest features three regular players: Dan Harmon, the famous comedy writer (Community, Rick & Morty) and podcaster (Harmontown); comedian Erin McGathy; and actor Jeff Davis. Respectively, they play half-orc ranger Fondue Zoobag, elven barbarian Biaro Shift and goblin rogue Bone Weevil.

There is also a special guest slot which is filled in by a rotating cast of comedians and actors: Paul F. Tompkins, Ron Funches, John Hodgman, Rhea Butcher, Kumail Nanjiani (as a pathological gold and handjob-obsessed kobold), Matt Gourley, Steve Agee, Chelsea Peretti (Brooklyn Nine-Nine) and Thomas Middleditch (Silicon Valley), along with an excellent appearance by the immortal Nathan Fillion (Firefly, Castle). The greatest turn, arguably, comes from the mighty Aubrey Plaza (Parks & Recreation) as the randomly insane gnome Hawaiian Coffee. The in-joke is that the guest characters can't continue into the next episode, so they have to be introduced to the adventure, fulfil a vital story role and then be written out (usually killed off in a ludicrous manner, but a couple survive) in an organic fashion, all in an hour (the episodes are the edited half-hour highlights of each game session).

That's a tall order for any Dungeon Master Gamemaster, but fortunately HarmonQuest employs the impressive skills of Spencer Crittenden, a GM for the ages. His ability to let the crazy comedy play out when it should, reign in the insanity when it threatens to completely sidetrack the adventure and pushing the story forwards whilst adapting for his players' impressive improvisational skills is completely amazing. I feel a better Gamemaster for just having watched him in action.

The adventure itself is splendid, old-skool fun: Fondue and Bone Weevil's favourite village haunt is destroyed by an evil cult seeking to unleash a powerful manticore upon the world. Teaming up with barbarian warrioress Biaro, they try to stop the cult getting its hands on the three gems it needs to complete the summoning ritual. This doesn't entirely go to plan. Along the way they have to deal with Fondue's unresolved childhood issues and confused sexuality (Harmon basically making a one-man argument in favour of characterisation in roleplaying), Bone Weevil's need for respect and Biaro's tendency to hulk out in a barbarian rage. There's some excellent running jokes but it's the guest actors that really make the show, each one bringing a different sensibility and style to the story which mixes things up nicely.

The big trick in the bag is that each episode of HarmonQuest is partly animated, with the live-action shots showing the actors and players discussing what they want to do and animated segments showing the result of their plans. The animation is colourful, well-characterised and quite funny. This is HarmonQuest's ace in the hole which lifts it from being simply entertaining to occasionally bordering on genius.

It's all very, very funny, although some episodes are funnier than others: the first, fifth and last ones are the stand-outs but even the weakest installment still unleashes regular laughs. Interestingly, the actors who have serious Dungeons and Dragons fantasy roleplaying experience seem to be the least amusing, as they take it all a bit too seriously, whilst those who have never played seem to do the best as they don't worry about the rules, just having a fun time.

I'd be interested to see that audiences with no fantasy roleplaying background at all make of it, but the show pulls back on anything to do with the rules in favour of the story and laughs so it should be pretty accessible for everyone.

Season 1 of HarmonQuest (****½) is excellent, being clever, funny and featuring a surprisingly well-executed story. I recommend it very much.

You can see Episode 1 on YouTube (embedded above) but the remaining nine episodes are only available (right now) on the Seeso streaming service in the United States. I imagine there will be some kind of international release (Netflix? Amazon?) for those wanting to watch the show in other parts of the world.

Note: the fantasy roleplaying game that is being used is the excellent Pathfinder from Paizo Publishing and, as Harmon rather worriedly points out several times, absolutely not Dungeons and Dragons in any way, shape or form, and certainly not any that suggests anything even vaguely copyright-infringing.
Posted by Adam Whitehead at 20:25