The Clone Wars continue to rage across the galaxy. The Separatist robot armies and the Republic's clone troopers mean that both sides can feed millions of troops into the fray, raising fears that the war may continue indefinitely. The Jedi Knights attempt to bring about a final victory, even as Count Dooku and General Grievous press home their attacks... 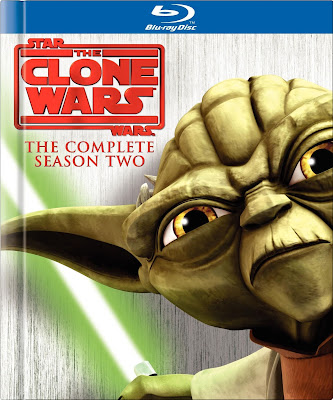 The first season of The Clone Wars was enjoyable enough, but limited assets and a low (ish) budget meant that it was more of a proof of concept for what the series could be. In its second season, The Clone Wars starts to fulfil that promise. The animation is more impressive, the space battles more epic, the stories longer and more involving, interspersed with some quite effective (and occasionally even moving) stand-alones.

The big stories revolve largely around the activities of bounty hunters, particularly recurring enemy Cad Bane, major military campaigns on Geonosis and Christophisis, and political intrigue on Coruscant and Mandalore. There is also a ludicrous but entertaining multi-part homage to Godzilla and King Kong, when a gigantic "Zillo Beast" is defeated in battle and transported to Coruscant, where naturally it escapes and mayhem ensues. The big stories are well-written and entertaining, although some are more interesting than others: the different bounty hunters the show is trying to set up this season can be a bit interchangeable and therefore less effective as villains.

The stand-alones are extremely good. One episode where a Republic officer finds a clone deserter hiding out on a planet and resolves to turn him in, only to have his moral certainty tested, is very well-handled. An episode where Ahsoka loses her lightsabre and enlists the help of an elderly and apparently past-his-best Jedi to aid her is also extremely entertaining. Another episode sees Ahsoka, Obi-Wan and Anakin reluctantly joining forces with a band of mercenaries in a homage to Seven Samurai.

There's also a renewed focus on more realistic politics (at least compared to the prequel movies, which isn't saying much) and a solid season-ending arc which sees Boba Fett infiltrate the clone ranks in an attempt to avenge the death of his father Jango at the hands of Mace Windu (in Attack of the Clones).

The result is a stronger season overall that delves further into the nature of war and the morality of conflict. There is some excellent character development, particularly of Obi-Wan, Anakin and Ashoka, and a scaling back of less successful elements: Jar-Jar doesn't have much to do this season, thankfully. There is also a lot of excellent battle sequences, great voice acting and some marvellous production design.

On the negative side of things, the way the story jumps backwards and forwards between times and locations occasionally risks confusion. Fans of the old Star Wars Expanded Universe will also probably be less than thrilled to see what's become the Mandalorians, the battle-hardened super warriors from numerous video games, comics and novels now reduced to pacifistic, squabbling fools.

Aside from that, Season 2 of The Clone Wars (****) is a major improvement over the first season in every way and makes for excellent pulp fun. It is available now as part of the Complete Season 1-5 box set (UK, USA).
Posted by Adam Whitehead at 18:03

Yeah, the Mandalorian arc was where I ragequit the series the first time around. I was then and still am a fan of the Karen Traviss books where she explores Mandalorian culture, and it pissed me off seeing this ridiculous retcon. However, I came back after a few years. The show picked up and we got to see some good stuff. But the Mando thing still annoys me.

I recently watched the whole series on Netflix (and did some blog post reflections), and I have to say that the series had its flaws but as a whole showed what a missed opportunity the prequels were. The relationships between Anakin and Ahsoka and Anakin and Obi-wan were pretty well fleshed out, I thought. The clones were humanized. And perhaps most importantly, Anakin was shown as a strong, mostly likable character. Makes his fall to the dark side actually feel tragic.