Tucker and Dale Versus Evil

A group of college kids head out into the woods for a weekend of tomfoolery at the same time good-hearted hillbillies Tucker and Dale take possession of their new holiday shack. When Tucker and Dale rescue one of the college girls after she injures herself, her friends think she's been abducted. Misunderstandings escalate out of control, until both groups believe they're being hunted by psychopaths and resolve to defend themselves no matter what. 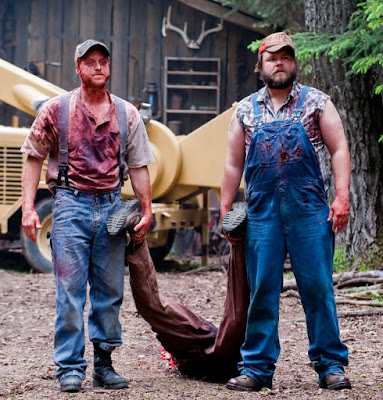 Comedy movies which riff off horror themes have been around for a while now, starting with the magnificent Evil Dead movies in the 1980s, continuing with the likes of Scream and Shaun of the Dead, and recently resurging thanks to the excellent Cabin in the Woods. Tucker and Dales Versus Evil is a fine addition to this pantheon of movies which seek to scare and amuse at the same time.

This is a quite clever movie which invokes almost ever single trope on the horror table: a bunch of teenage kids out in the woods drinking alcohol and taking drugs, chainsaws, people being picked off one-by-one, buildings burning down and a final confrontation in a sawmill. What makes the movie work so brilliantly is that the whole thing kicks off due to misunderstandings and the belief of the characters in what will happen based on their own exposure to horror movies. In fact, you could re-edit the movie to take place entirely from either Tucker and Dale's POV or that of the kids and you'd entirely get where each side is coming from.

That said, the movie doesn't hold an entirely unbiased view of what's going on: our sympathies are firmly with Tucker and Dale throughout the picture. Alan Tudyk (Firefly) plays Tucker, the somewhat more savvy of the two hillbillies (or so it first appears), with his usual brilliant comic timing but the heart of the picture belongs to Tyler Labine (Reaper) as Dale, whose early dumb schtick masks a much smarter and more resourceful person. One of the underlying premises of the movie is that Dale is trying to woo college girl Allison (a sympathetic performance by Katrina Bowden) which initially seems ridiculous but the actors actually sell the idea they might be just about right for one another. These kind of relationships are usually contrived in both horror and comedy films, but this one works just fine.

The college kids are less sympathetic, bringing about most of their stupidity and ludicrously gory deaths on themselves. Debut director Eli Craig seems to take glee in working out how each one is going to meet their end and then outdoes himself with the next one (although the woodchipper scene remains the most memorable death in the movie). 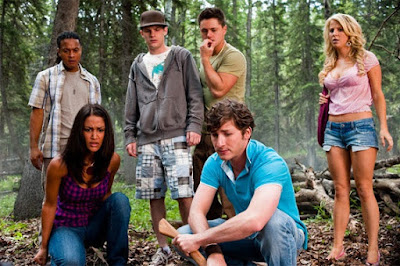 So the film is well-played, hilarious and takes a wry, smart look at the tropes of horror movies that pays homage to them (even fellow horror-comedies, as The Evil Dead 2 gets several shout-outs). The film does have two, relatively minor, weaknesses. First is that it is a little too quick to cut to the chase. Based on the effectively frantic pacing, the movie should really be over at around the 70 minute mark and the team then have to drag out the finale to get the film up to feature length. Perhaps a little more scene-setting at the start and making the college kids more interesting and sympathetic would have helped the audience care more when they start expiring.

Secondly, the film doesn't entirely have the courage of its convictions and ultimately drops in a real murderous killer into the story. I agree that it would be tough to let the carnage keep playing out as the result of a case of mistaken identity (although they do manage it for more than half of the movie), but it would have been interesting to see them try. Having a real bad guy in the film does kind of feel like it's going against its own premise.

Tucker and Dale Versus Evil (****) is spectacularly gory, extremely funny and cleverer than it first appears, but can't quite maintain the brilliance of its first half all the way to the end. But it's still an outrageously entertaining slice of horror-comedy. It's available now in the UK (DVD, Blu-Ray) and USA (DVD, Blu-Ray). It's also available on Netflix in many territories.
Posted by Adam Whitehead at 20:49

Email ThisBlogThis!Share to TwitterShare to FacebookShare to Pinterest
Labels: alan tudyk, tucker and dale versus evil