Rico Rodriguez has returned to his home island of Medici to remove the brutal dictator Di Ravello. He finds a nascent rebel army that is hamstrung by a lack of leadership and bold tactical ability, so, aided by his childhood friend Mario and the technical genius Dimah, he sets about building them into a more effective fighting force. 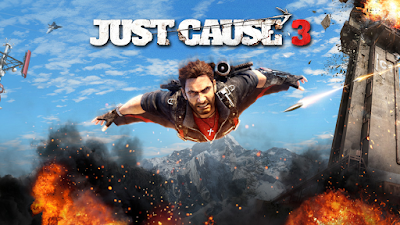 In 1999 the epic roleplaying game Planescape: Torment asked, "What can change the nature of a man?" Many answers were offered, such as love, idealism or religion. But, in an unfortunate lack of vision, the game never answered "Standing upside down under an enemy helicopter simultaneously firing two Uzis and then rappelling onto a nearby building and grappling the helicopter to a fuel tank, with predictable results." Doing that sort of thing certainly changes the nature of a man.

Just Cause 3 defies convention by being the third game in the Just Cause series, which is what happens when crazed Swedish video game designers decide to merge the Far Cry and Grand Theft Auto games and see what mayhem results. Like the Far Cry series, Just Cause 3 is set in an exotic location where you have to bring down a charismatic dictator by allying with rebel groups and leading them into battle. Like Grand Theft Auto, the action takes place in an enormous open world with a vast number of vehicles, from motorbikes to jet fighters, to steal ("liberate for the resistance") and utilise in battle. 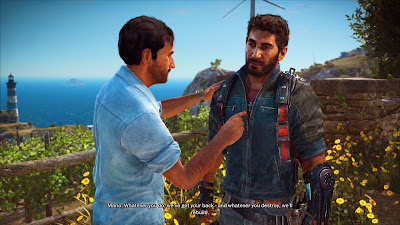 Expanding on the use of the grappling hook in Just Cause 2, Just Cause 3 also gives Rico a tremendous amount of personal freedom of movement. As previously he has access to an infinite number of parachutes, but also now has a wingsuit that allows him to fly around like a lunatic bat if he so wishes. These can be combined with the grapple to allow him to paraglide up the side of mountains or be towed along at speed by passing trains. A tremendous and satisfying number of giggles can be had by just throwing Rico around the environment and finding out just what he can do with his increasingly bizarre equipment set (which is more impressive than Batman's by this point).

The game's storyline is enjoyable nonsense, although enlivened by much better writing and voice acting than previously. Dimah, the slightly mad scientist of the resistance, is hilarious and there's a growing narrative element as Rico discovers the extent to which his entire life has been manipulated by the CIA. This storyline remains unresolved at the end of the game, and is a pretty big clue that the team are preparing a Just Cause 4 to continue this thread. There's also a lot more story missions (about four times as many as Just Cause 2), with scripted set-pieces to help break up the open-world mayhem. 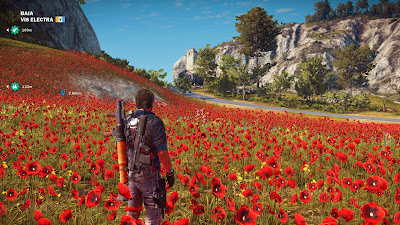 The game expands on the territorial mechanics of Just Cause 2, with you now having to liberate both civilian towns and military bases to secure control of a region. This is a fine idea in theory but in practice it falters a little bit. Going in and blowing up a base full of bad soldiers and mercs is one thing, but unleashing destruction inside towns without much regard for civilian casualties feels a little out of keeping with the game's storyline (in which Rico is a folk hero and man of the people). It would have been more interesting to have introduced a way of subtly undermining towns, recruiting locals to help sabotage infrastructure and so on, but nope, the only way of freeing towns is to go in and blow away every soldier in sight, topple statues and knock over propaganda speakers.

The game is definitely a step up from Just Cause 2 in how much it hand-crafts each town and base. Although a lot of the previous game's bases were identical in appearance and construction, this third game has a much larger number of assets it puts together in more interesting configurations. Enemy bases are also now defended by SAM sites, making the old tactic of simply raking a base with rockets from a helicopter to destroy it a lot more hazardous and forcing you to engage in much more close-up action. 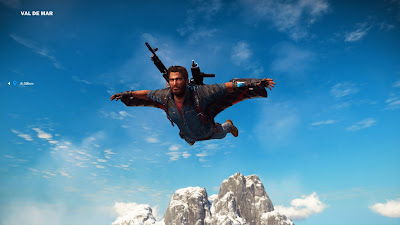 There's a satisfyingly large array of guns and military vehicles to employ, and more opportunities to call in your rebel friends and fight alongside them, making the war feel more of a genuine, large-scale conflict rather than it just being Rico running around doing everything. As you paint the map blue you can see the front lines shifting and see the rebels gaining access to better equipment. The game sells the idea of a major conflict going on far better than its predecessor or the Far Cry series.

The story is enjoyable, the action is much stronger than in Just Cause 2 and, obviously, it's a more impressive game graphically. On the negative side of things, Just Cause 3 can get repetitive, especially if you choose to focus on the base missions and storyline. Some of the numerous side-missions (like stunt flying or taking part in street races) help break up the monotony of constant combat, even if they themselves can get quite repetitive after a while. There's also the feeling that the main villain, Di Ravello, is a very uninteresting antagonist, especially compared to the likes of Far Cry's Pagan Min and Vaas.

Otherwise, Just Cause 3 (****½) offers an inventive and vast amount of ways of let of steam, blow things up and have fun. It's the brainless action game genre at its very best. It is available now on PC, X-Box One (UK, USA) and PlayStation 4 (UK, USA).
Posted by Adam Whitehead at 18:21