Elliot Alderson is an IT technician who suffers from anxiety and depression. At night he hacks other people on the internet, sometimes just for something to do, sometimes to help them. His skills are called upon when he is recruited by the enigmatic "Mr. Robot" into a hacker's collective, Fsociety, which plans to bring down E-Corp (which Elliot nicknames "Evil Corp") and erase all of society's debt as a way of freeing it from control by the banks and governments. 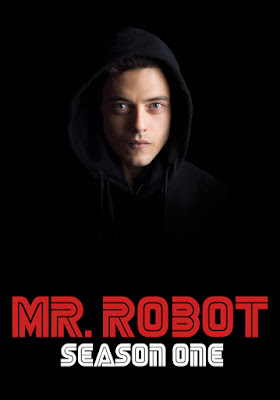 Mr. Robot is an intriguing show. Created and developed by idiosyncratic film-maker Sam Esmail, its premise sounds deeply boring. In actuality, it's one of the best-directed, visually distinctive shows of the last few years, with a layered, complex and fascinating plot related through some extraordinary performances. There's nothing quite else out there like it in terms of it having its own unique feel and atmosphere, save maybe the first season of True Detective and both (so far) of Fargo, although it's a very different kind of series.

The series is rooted in the character of Elliot. Elliot is a massively atypical protagonist. He is nervous, anxious, socially awkward and suffering from a range of anxiety and depressive issues. He is a brilliant hacker and technician, but his ability to work with other people is limited. He also has boundary issues and finds it hard to relate to people around him. It's a tremendously powerful and nuanced performance by Rami Malek, who sells this awkward and damaged human being with total conviction and utter skill.

The actors around him are just as good: Christian Slater is very good as Mr. Robot (who doesn't appear that often but gives a nervous, edgy and intense performance when he does) but one of the other stand-outs is Portia Doubleday as Angela, Elliot's best friend, who starts off feeling like a disposable side-character but rapidly becomes an integral figure as she is blackmailed by a different hacking group and inadvertently ends up ascending the hallways of corporate power. Her character arc is unexpected and brilliantly developed. Frankie Shaw also gives a charismatic performance as Shayla, Elliot's drug-dealing neighbour who starts off as a bit of a cliche but very rapidly becomes a compelling character. Martin Wallstrom also gives a blisteringly intense, offbeat and bizarre performance as Tyrell Wellick, the corporate super-executive who is very much Elliot's mirror image but uses his brilliance for much darker ends.

The direction is intriguingly different, putting characters in the corners of the screen to make them feel crushed by the space around them, reflecting the magnitudes of the tasks they face. The musical score is atmospheric and sparse and the story developers with pace and verve over the course of the ten episodes in the first season. Up until around the sixth or seventh episode, I was convinced that the first season of Mr. Robot was going to supplant the first season of Fargo as my favourite season of television this decade.

Then it all goes off the rails.

Not completely or fatally, but in the last couple of episodes of the season Esmail puts an explosive device under the storyline you thought you were watching and blows it to pieces. Rarely have I seen a show that was so bold as to completely rewrite what you thought you were watching and start telling a new story. It's conceptually brilliant, artistically brave and, from a creative writing standpoint, very impressive. The problem is that this paradigm shift really only benefits a few characters (Angela and Darlene, most notably) but it has a huge detrimental affect on Elliot, who becomes much more difficult to read and sympathise with as a character as a result. There's also a similar shift (if for different reasons) for Tyrell, who becomes flat-out loathsome and utterly repugnant. Then there's the fact that this shift completely shunts the Fsociety hacking storyline, which dominates most of the season, to one side. It feels like the audience's emotional investment in the characters and storylines is short-changed by it being revealed that so much of what we thought was going on wasn't right.

Some people may disagree, and certainly the blanket acclaim levelled on the show - even the bitty and highly unsatisfying semi-cliffhanger finale - shows that it works for many. But for me it leaves Season 2 with a lot of work to do to redeem that final twist and make it work.

Mr. Robot's first season (****) is certainly worth watching for its fantastic acting, directing and atmosphere, not to mention its unusually accurate depiction of hacking, and for its superb character development. The way the season ends is also startling, shocking and fascinating, but also divisive. The season is available now on Blu-Ray (UK, USA) and DVD (UK, USA).
Posted by Adam Whitehead at 13:26