Ricardo Pinto's The Stone Dance of the Chameleon trilogy was one of the more interesting fantasy series of the 2000s, set in an unusual fantasy world with vivid characters. The series attracted a lot of praise for its opening volumes, The Chosen (1999) and The Standing Dead (2002), but a long delay for the third volume (caused by a fire which destroyed an in-progress manuscript, among other setbacks) seemed to dissipate anticipation and the response for The Third God (2009) was muted. 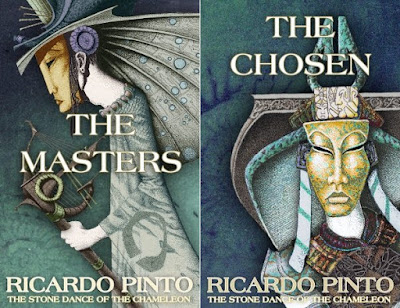 Pinto has now gone back and re-edited and even rewritten the series. Acknowledging the criticism that the series was too long, the edits have reduced the total size of the sequence by around a quarter. He has also re-edited the series into seven much slimmer, more focused volumes. The first two, The Masters and The Chosen, are now available (UK, USA), with the third, The Standing Dead, due for release in April. The seventh and final book should be released in November.

This isn't the first such re-releasing plan for an earlier series, with David Wingrove doing something similar for his enormous Chung Kuo SF series (although that was complicated by disappointing sales and a mid-series shift to self-publishing), but Pinto is doing it in a much more focused and controlled way. It should be interesting to see how it is received in its new format.

The blurb for Book 1:


A black ship defies winter gales, bringing to young Carnelian’s remote island of exile three masked Lords of the Chosen—a cruel ruling caste. These Masters beg his father to return with them to oversee the election of a new God Emperor. To repair their ship, they pillage and destroy Carnelian’s home—the only world he’s ever known—condemning his people to starve. He and his father embark with the visitors on a long and perilous journey—against deadly opposition—to Osrakum, the heart and wonder of the world and seat of absolute power.

Email ThisBlogThis!Share to TwitterShare to FacebookShare to Pinterest
Labels: news, ricardo pinto, the stone dance of the chameleon