THE HITCH-HIKER'S GUIDE TO THE GALAXY turns 42 today

Douglas Adams' Hitch-Hiker's Guide to the Galaxy franchise celebrates its 42nd anniversary today. As hopefully everyone knows, 42 is the Answer to the Ultimate Question of Life, the Universe and Everything in the series. 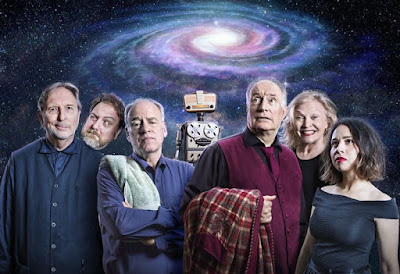 Arguably the first truly transmedia franchise, The Hitch-Hiker's Guide to the Galaxy began as a radio play performed on the BBC. The first episode was released on 8 March 1978. Later that year Adams novelised the radio script as an instantly-bestselling novel. A second series of the radio play followed in 1979, novelised later that year as The Restaurant at the End of the Universe.

In 1981 the story was adapted by BBC television as a (relatively) high-budget mini-series. More novels followed: Life, the Universe and Everything (1982), So Long and Thanks for all the Fish (1984) and Mostly Harmless (1992). There was also a highly-regarded (and recently-remastered) video game in 1984 and a feature film in 2005, although this only received a middling reception. There have also been additional radio plays based on the series.

Hulu confirmed last year that they are developing a new television series, this time with a view to adapting the whole book series (the first TV series only covered the first two books).

The Hitch-Hiker's Guide to the Galaxy is one of the most popular SF franchises of all time; with more than 20 million books sold, it is breathing down the neck of the Dune series. It was also arguably one of the first highly successful SF comedies (preceded only really by The Jetsons), paving the way for later works including Red Dwarf and Futurama. Much of Hitch-Hiker's iconography, including the number 42, intelligent dolphins and mice and the importance of towels, has become part of the British cultural landscape. The Hugo-nominated novel Space Opera is a recent homage to the books.

Here's to another 42 years (at least) of Arthur Dent and his hapless misadventures in time and space.
Posted by Adam Whitehead at 12:28

Email ThisBlogThis!Share to TwitterShare to FacebookShare to Pinterest
Labels: anniversaries, douglas adams, news, the hitch-hiker's guide to the galaxy