The Letter for the King

Tiuri is a young man training to be a knight to make his adopted father proud, but has little aptitude for the task. His holy vigil is interrupted by a messenger who has a vital letter that has to be delivered across the forbidding Great Mountains to the king of a neighbouring land. Framed for murder by those who are seeking to stop the letter, Tiuri has to amass a band of companions and undertake the most hazardous journey of his life. 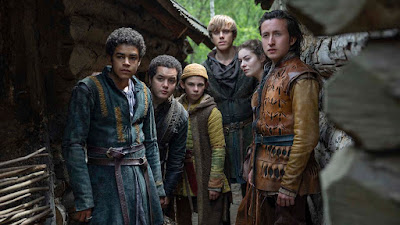 The Letter for the King is a Netflix TV mini-series based loosely on the classic 1962 Dutch fantasy novel De brief voor de Koning by Tonke Dragt. Unlike a lot of recent TV fantasy fare - Game of Thrones, Netflix's own The Witcher - it is a relatively light series aimed at a family audience with a refreshing lack of decapitations, gore or other graphic content.

In terms of narrative, the story is nothing new but it is well-executed. The series has a pretty good cast of seasoned hands supporting the central cast of mostly newcomers, with David Wenham (The Lord of the Rings trilogy's Faramir) as Tiuri's adopted father, Omid Djalili as a minor villain and Andy Serkis as the mayor of a disreputable town.

The young cast is more of a mixed bag: Amir Wilson was excellent as Will in His Dark Materials but is a bit more of a mixed bag here. This isn't his issue as more one with the script: Tiuri is very passive and reactive to events, and becomes more interesting when he comes up with and executes a plan himself, which is quite rare. Most of the time the script calls on him to stand around and gawp at what's going on (including the infuriating "exchanging long looks with people in moments of danger instead of running away like a lunatic" trope), which doesn't stretch him much as an actor. Ruby Serkis (daughter of Andy) is more dynamic and has a stronger character arc as Lavinia, the headstrong daughter of the corrupt mayor who decides to hijack Tiuri's quest for her own purposes (a nice idea I'd like to see more of in fantasy). The rest of the central, proto-D&D band of heroes is fun, although they tend towards being more a collection of walking archetypes than fully-fleshed out characters.

The villains are more interesting because they are surprisingly well-fleshed-out, with some notable depth such as when the main bad guy's henchmen realise their boss wants to do something that might destroy the world and abruptly realising that they might not be down for that. There's also an interesting and offbeat mentor-student relationship between semi-villain Jaro (Peter Ferdinando) and Iona (Thaddea Graham), a member of the heroe's band, which develops intriguingly despite them being on opposite sides of the struggle (and could probably set-up a spin-off series if they wanted).

The real star of the show is Ardanwen, the massive black horse which Tiuri inherits along with his mission. A total ham and scene-stealer, Ardanwen is one of the best horse actors I've seen on TV, even if his tendency to save the day is slightly over-used as the series progresses.

The filming locations in New Zealand and the Czech Republic are stunning, the visual effects are restrained and effective and the soundtrack solid (if not revolutionary). The acting is sometimes more enthusiastic than nuanced and the script is kind of all over the place, but overall the show is fun and watchable. It scratches the itch left behind by family fantasy shows like Merlin whilst being a bit more watchable.

The first and presumably only season of The Letter for the King (***½) is available to watch on Netflix now.
Posted by Adam Whitehead at 12:35