As previously rumoured, Sony have formally confirmed that their 2017 PlayStation 4 exclusive video game Horizon: Zero Dawn will be released on PC this year. This marks the first time a Sony-owned-and-developed video game has been released on the PC platform, and may mark a long-term strategic shift in Sony's thinking. 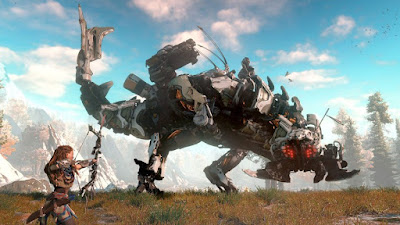 Hermen Hulst, the former head at Guerrilla Games and now head of PlayStation's Worldwide Studios, confirmed the news in an interview on the official PlayStation blog. Hulst cautioned that fans should not expect a flood of other PlayStation exclusives to suddenly hit PC, but that they decided that Horizon: Zero Dawn was a good initial fit to test the waters.

Sony's strategy in the past has been to lock down games that are exclusive to their platform to encourage people to buy PlayStation consoles. In the past Sony has worked on a three tier basis: external developers can make games for multiple platforms simultaneously; external developers operating under licence to Sony and are paid for exclusivity, either permanent or temporary; and wholly-owned subsidiaries which develop exclusively for the PlayStation.

We've seen more and more games in the second tier, games which were previously exclusive to PlayStation which made their way to PC years later, such as Journey, Dark Souls, Final Fantasy and the Quantic Dreams games, but never a game in the third tier. Despite Hulst cautioning against more exclusives making their way to PC, gamers will now be looking to see if other exclusive titles such as The Last of Us, Spider-Man, God of War or the Uncharted series make the transition.

The game arguably most in-demand after Horizon: Zero Dawn is Bloodborne, From Software's hit 2015 action game. Developed externally by From under an exclusive licence from Sony, Bloodborne is actually more likely to hit PC once that exclusivity period ends.

The news follows Microsoft's decision to release all X-Box exclusives on PC going forwards, and indicates that both Microsoft and Sony view the future as being more platform-agnostic with services and games available on a variety of devices.
Posted by Adam Whitehead at 15:59