Jeff Winger is firmly ensconced in his new role as a teacher at Greendale Community College, but times are changing. Shirley has moved away to look after her sick father and the college is still in danger of closure. The Save Greendale committee is reinforced by the arrival of consultant Frankie Dart and old-skool computer expert Elroy Patashnik, who have to help the few remaining old students save the day. 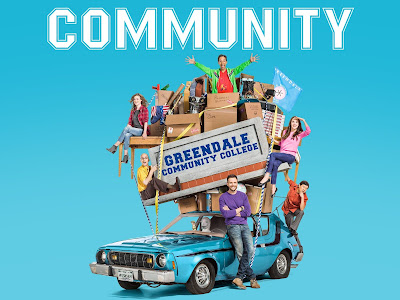 It's ironic, but also a relief that Community, a show which hovered perpetually on the edge of cancellation for its entire 110-episode run, was allowed to end on its own terms. The show had been picked up by Yahoo after NBC terminated it at the end of the fifth season and Yahoo were keen to allow it to continue for at least one more season, but showrunner Dan Harmon decided to quit whilst he was ahead. His reasoning was that too many of the original regular cast had left and the show was no longer working with the same energy.

This is clearly visible on-screen. Community now feels like a very different beast. Although many of the episode plots were driven by the antics of Jeff Winger, Senor Chang or the Dean's latest crazy college activity (all of which remain intact), in many ways it was Troy and Shirley who were the heart of the show. At least Troy got a farewell in Season 5 but Shirley's extremely abrupt between-season departure is clearly an unplanned event that left the writers reeling to try to overcome it, and they don't really succeed.

This is no slight against Paget Brewster (Frankie Dart) or Keith David (Elroy), who both do very good work. It's just that they're being held to the very high standards of the characters who came before them, who had an unmatched chemistry with the rest of the cast. A sense of continuity is also not maintained due to the inexplicable departure of both John Oliver and Jonathan Banks from the Season 5 recurring cast.

The result is a season of Community that feels like it's running a little with its wings clipped. Episodes are a little less inventive than previously and Abed particularly feels limited as a character, as he no longer has Troy to riff off. This is a shame because many of the episode ideas feel like vintage Community: Honda sponsoring a ridiculous number of product placements at the college, a suddenly-famous Chang leaving midway through Abed's video shoot (forcing him to recycle the same brief clips into an entire movie) and the revelation that the paintball game has not ceased as previous seasons indicated, but instead moved underground.

The show is still funny, there's still some laughs and some more emotional beats, but there's also a sense of unbalance, of something missing. This is a subdued version of Community, one that's certainly still worth watching and is still a lot of fun, but also not running with the energy of earlier seasons. One moment where the show does rise to the occasion is the finale, which is bittersweet, poignant and genuinely funny, whilst retaining the metacommentary creator Dan Harmon is best-known for.

Community's sixth and final season (***½) is available now in the UK and USA. The much-promised movie has, alas, not yet appeared.
Posted by Adam Whitehead at 17:23

I struggled with Season 6. Still pretty enjoyable, but it didn't have the same feel to it now that Jeff is a teacher at Greendale.

Still, it was worth watching as it has some good moments.