The Stars Are Legion by Kameron Hurley

War is raging for control of the Legion, a fleet of organic world-ships travelling on a journey so long nobody can remember when it started or what their destination is. The amnesiac Zan, a soldier of the world-ship Katzyrna, is told she must lead an assault on the Mokshi to claim it and its secrets, but the Katzyrna is also at war with the world-ship Bhavaja, whose ruler is playing their own game. As the rulers of the Legion scheme and feud with one another, Zan finds herself outcast and having to make her own way home...and discover who she is at the same time. 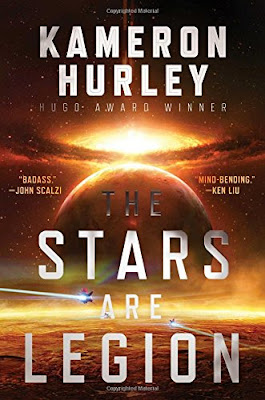 The Stars Are Legion is a stand-alone novel from Kameron Hurley, the author of the excellent Worldbreaker Saga and the even more excellent Bel Dame Apocrypha. Like the Bel Dame Apocrypha (which, it occurs, could take place in the same universe), The Stars Are Legion mixes elements of science fiction and fantasy. The setting, the space battles and elements such as genetic engineering all borrow from SF, but the journey through a grotesque land of the bizarre and the ultra-advanced technology which seems indistinguishable from magic borrows much more from fantasy.

Although the worldbuilding is strange, the set-up is fairly standard: we have an amnesiac protagonist who finds her surroundings as whacked-out as we do, and through her we learn more about the world than if we were joining the action in a more traditional manner. Zan's chapters alternate with those of Jayd, Zan's friend and lover who still has her memory intact, allowing us to start piecing together what is going on from incomplete information. Early on it's clear that Zan is a fighter and grunt of unparalleled resourcefulness, with a slightly reckless streak, whilst Jayd is much more a strategist and tactician, with a remarkable gift for planning ahead, although she also tends to underestimate others' own strategic skills and reacts less well to new developments.

Our two protagonists are both interesting figures whose differing natures are highlighted by circumstance: Zan is cast into the depths of the world-ship Katzyrna and has to make her way back home through mysterious locations, a clear parallel to Orpheus returning from the Underworld (or Jack Vance's Cugel the Clever making his way back from the edge of the world...twice!), whilst Jayd has to play a much more cautious game of politic intrigue and deception between powerful warlords who could kill her in an instant, if they didn't crave the power she possesses.

The unusual setting - the organic technology which powers everything from weapons to ships to recycling systems is quite spectacularly revolting - is rich and evocative, and the plot ticks along with a nice sense of pace. Hurley's gift is a furious sense of character and atmosphere, and the The Stars Are Legion contains plenty of examples of that gift. However, as the book ticks down to its well-executed ending, it does feel like the book lacks just a little bit of the extra exposition needed to establish the setting a bit better. After her first two fantasy series, it's clear that Hurley isn't a huge fan of the infodump school of exposition, but those series also had the time over multiple volumes to establish their worlds in greater depth. The Stars Are Legion can't do that, and I finished the book with a broad understanding of what happened but some worldbuilding elements still felt a bit fuzzy. Some complaints I've seen that the Legion's origins and destination aren't explained at all (although a children's storybook hints that the Legion may have originated on a planet like ours, many thousands of years earlier) I didn't feel were particularly valid, though. The setting is perfectly adequate to the story being told.

The Stars Are Legion (****) lacks the epic scope of Hurley's other work, but makes up for it with a great sense of focus and pace. The novel is available in the UK and USA now.
Posted by Adam Whitehead at 19:46

Where would be a good place to start with Kameron Hurley's work?

You can start with this one, as it's a total stand-alone, or THE MIRROR EMPIRE, the first in the WORLDBREAKER SAGA, or her latest book THE LIGHT BRIGADE, which is another stand-alone. However I think the best bet is to go with her first book, GOD'S WAR, and go from there.