Red Dead Redemption 2 to hit PC in November as an Epic Store exclusive! (for a month)

Rockstar Games' Red Dead Redemption 2, the most successful horse-riding simulator of all time, is heading to PC on 5 November after a year as  a console exclusive. The game will also launch exclusively on the controversial Epic Store, although in this case the exclusivity period is a modest one month rather than the 6-12 months some other games have been locked down for. 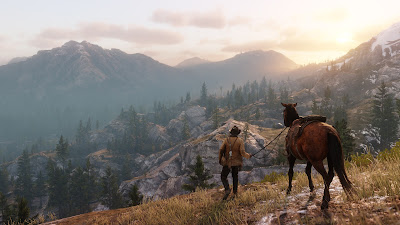 The game has sold over 25 million copies on X-Box One and PlayStation 4, with the PC version expected to add significantly more impressive graphics and more varied control options, as well as more missions and activities. Red Dead Online, the game's multiplayer component, will also be included.
Posted by Adam Whitehead at 18:22