THE WITCHER likely to hit Netflix on 17 December

Netflix have been pretty quiet about exactly when their TV adaptation of Andrzej Sapkowski's Witcher novels is going to hit screens. A flurry of marketing activity last month pointed towards a mid-November launch but, if that was the case, clearly Netflix have changed their minds. 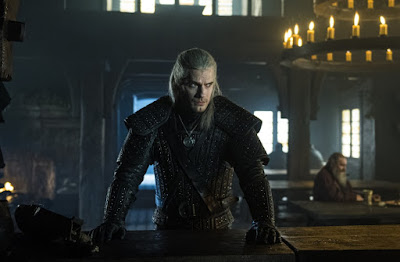 The new likely release date is 17 December. Netflix's official Dutch Twitter account inadvertently gave the game away and that's now been backed up by news that the show will have its official world premiere in London on 16 December.

It's a reasonable date, since the previous one looked like it was going to pitch The Witcher directly against the other big secondary world fantasy series of this year, His Dark Materials (which debuts on Sunday 4 November). Opening up a bit more of a gap between them is a reasonable move.

Season 1 of The Witcher is eight episodes long and adapts several short stories from the first two Witcher books, The Last Wish and Sword of Destiny, as well as adding some new material and setting up elements from later in the book series.
Posted by Adam Whitehead at 20:22