All nine books in Jacqueline Carey's Kushiel series of fantasy novels have been optioned by Lionsgate. 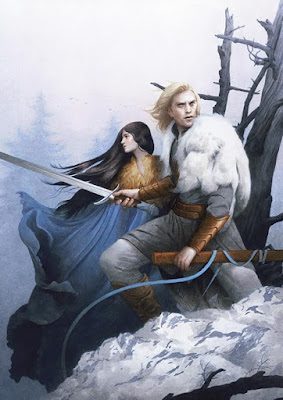 Lionsgate have picked up the rights to the trilogy-of-trilogies with a view for developing them for film, TV or possibly both. The early announcement suggests a film (presumably of the first book in the series, Kushiel's Dart), but both options seem to be on the table.

The Kushiel series is set in a fantasied, alternate-reality version of Europe, principally in the kingdom of Terre d'Ange (a parallel history version of France). The series deals with complex worldbuilding, including a parallel version of Christianity which evolved in a very different form, not to mention a different version of Judaism. The series is also noted for its explicit sexual politics, which would seem to favour a TV adaptation rather than a movie (which would have to be rated R).

This is only an option for now and Lionsgate have been through some difficulties recently, including some setbacks to their Kingkiller Chronicle mixed TV-and-movie project. However, the Kushiel series has the benefit of being complete, which addresses the major problem with the Kingkiller project.
Posted by Adam Whitehead at 21:21

I really enjoyed these books! I hope this goes somewhere.