Marvel and Disney have put a fourth Captain America film into development. Unlike previous instalments of the series, which saw Chris Evans starring as Steve Rogers in the title role, the new film will focus on Anthony Mackie's Sam Wilson taking up the mantle. 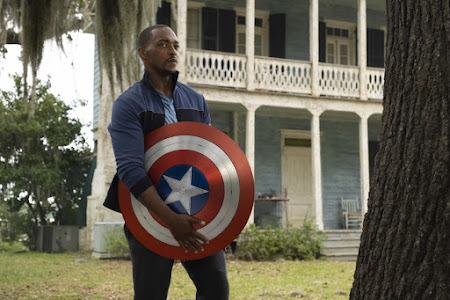 Note: Spoilers for The Falcon and the Winter Soldier follow.

Malcolm Spellman, who executive produced and showran The Falcon and the Winter Soldier, as well as writing the critically-acclaimed fifth episode, is developing the new script with Dalan Musson, a fellow writer on the show.

The TV series saw Sam, who'd been offered the shield and the name by an aged and retired Rogers at the end of Avengers: Endgame (2019), struggling with the idea of taking on the mantle. He initially turns down the role, leading to the US government instead naming another soldier, John Walker, to the position. Walker turns out not to have the "right stuff" to be Captain America, leading Sam to finally accept the position at the end of the series.

To what degree the film will follow up on the TV series is unclear, but the TV series does put a lot of other balls in play, including having Baron Zemo (Daniel Brühl) back behind bars; Sharon Carter (Emily VanCamp) pardoned and returned to working for the US government, but having a shadowy agenda of her own; and Walker - having been injected with a milder form of Steve's super-serum - being recruited as a secret agent by the redoubtable Valentine Allegra de Fontaine (Julia Louis-Dreyfus). Sam has also formed a strong working partnership with Bucky Barnes, the reformed Winter Soldier (Sebastian Stan).

This marks the first time in the Marvel Cinematic Universe that the title of one major superhero has passed to another. Marvel will no doubt be assessing the success of such a move to determine how long they can keep the MCU going in the current continuity before they feel they have to reboot.

With development of the film only just starting, it's likely we won't see the film until 2023 at the earliest. and maybe more likely 2024. Between now and then Marvel plans to release Black Widow, Shang-Chi and the Legend of the Ten Rings, Eternals, Spider-Man: No Way Home, Dr. Strange in the Multiverse of Madness, Thor: Love and Thunder, Black Panther II, Captain Marvel 2, Ant-Man and the Wasp: Quantumania, Guardians of the Galaxy Vol. 3, Fantastic Four and Blade.

Email ThisBlogThis!Share to TwitterShare to FacebookShare to Pinterest
Labels: captain america, disney, marvel, the falcon and the winter soldier