New Zealand TV show Wellington Paranormal, a spin-off from What We Do in the Shadows (the film, not the TV show, although the TV show is also a spin-off from the film and co-exists in the same universe with the movie and the spin-off), finally arrives in the UK and Ireland on Monday, via Sky TV and NowTV. 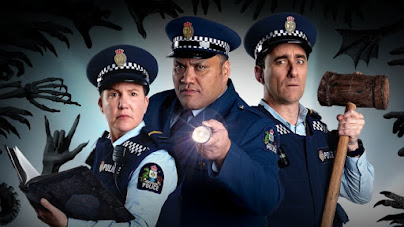 The show is set in Wellington, New Zealand and follows the hapless adventures of Minogue and O'Leary, the two easily-hypnotised cops who play a role in the original film. Minogue and O'Leary's close brush with the vampire and werewolf gangs of Wellington makes them ideally-suited to head up a new supernatural investigations unit headed by Senior Sergeant Maaka. Their investigations lead them into encounters with a body-hopping demon, an alien invasion, ghosts, creepy clowns, zombies and a sentient fatberg. Familiar faces from What We Do in the Shadows also crop up from time to time.

The series is executive produced by Taika Waititi and Jemaine Clement, who also writes, directs and script edits. The first three seasons will be available from Monday 5 April on Sky TV and NowTV in the UK. The series is also launching soon on The CW in the USA, with each episode available on HBO Max the day after initial transmission.

The What We Do in the Shadows series recently began filming on its third season (delayed due to COVID), with a view to it airing on FX in the USA and the BBC in the UK later this year or early next.

Email ThisBlogThis!Share to TwitterShare to FacebookShare to Pinterest
Labels: jemaine clement, taika waititi, wellington paranormal, what we do in the shadows

This is great news and I will be watching. I’d only heard of We’re Wolves,

I adored What we do in the Shadows, but preferred the movies over the T.V. Series. (Which is still funny and well worth watching.)