Robert's Rebellion spin-off off the table (again) at HBO

It has been clarified that HBO are not developing a Game of Thrones spin-off show about Robert's Rebellion, arguably the most important event in the backstory of the series. Instead, journalist James Hibberd has confirmed that rumours of this were the result of confusion over the recently-announced stage play project. 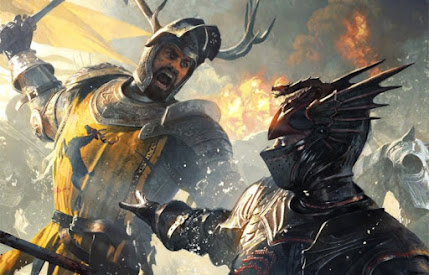 The stage play will tell the story of the Great Harrenhal Tourney in the Year of False Spring, where Lyanna Stark met Rhaegar Targaryen, sparking a chain of events leading to Robert's Rebellion. George R.R. Martin had previously said that the true story of the tourney and the Rebellion is something he is not interested in pursuing, as the Song of Ice and Fire novels will reveal the backstory of the Rebellion even as it expands the current-day storyline, and by the end of the novels readers will know all the important beats of the war. Creating a spin-off novel or TV show based on the Rebellion would simply be "joining the dots," and not interesting in itself.

Clearly he changed his mind on the tourney, perhaps because it takes place on a much smaller scale with a constrained cast of characters in one location, suiting the medium quite well. The Rebellion itself, however, sounds like it has returned to not being on the cards.

HBO are instead about to imminently start shooting House of the Dragon, a prequel series about the Dance of Dragons, a bloody civil war that raged within House Targaryen about 170 years before the events of the books and TV show. They are also in discussion on multiple other projects, including an animated series, a series about the great explorer Corlys Velaryon, a series set in the slums of Flea Bottom in King's Landing, and another epic show about Nymeria and her flight to Dorne after her homeland is destroyed by the Valyrians. HBO has also been developing ideas for adapting the Dunk & Egg prequel novellas, although Martin has also been reluctant to discuss that project before the novella series is complete.

Just as well. The immediate backstory to the events of A Song of Ice and Fire, drip-fed through different sources (Ned's dreams, Jaime's recollections, Meera Reed's crannogman story, and so on), leaving nearly everything to the reader's imagination - that's pure magic. It makes the backstory legendary, the way your parents' past lives seem legendary to you as a child.

A detailed depiction of such mythical events can only disappoint (like the Tower of Joy sequence from the TV series), and the drive for such works represent to me ultimate creative bankruptcy.