Jason Schreier at Bloomberg has a fascinating report on unrest and uncertainty at the Sony Studios group of video game developers. 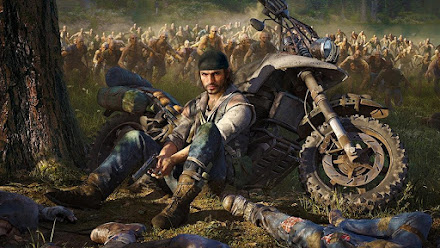 Days Gone, a relatively well-received Sony exclusive from 2019. Sony have shot down plans for a sequel, but the game is getting a second shot at success via a PC release later in 2021.

Sony's PlayStation video game console has been the leading console in four successive generations of hardware: the original PlayStation (1994) emerged triumphant over the Nintendo 64 and Sega Saturn, whilst the PlayStation 2 (2000) outsold the original Microsoft Xbox, Sega Dreamcast and Nintendo GameCube. The PlayStation 3 (2006) initially lost ground to the Microsoft Xbox 360 (released a year earlier), but clawed back the lead to emerge the more successful console, although both were outsold by the Nintendo Wii, which had pivoted to focus on younger gamers. The PlayStation 4 (2013) much more comfortably defeated the Xbox One and Wii U.

The PlayStation 5 was launched at the end of 2020, almost simultaneously with the Xbox Series X, with sales of both consoles being surprisingly comparable. There was a widespread expectation that the PlayStation 5 would, again, comfortably outsell the Microsoft rival. Sony's success is rooted in two factors: their utter market domination in Japan and other parts of Asia, where Xbox sales are almost negligible; and their catalogue of exclusive titles not available on other systems, including the Uncharted, Last of Us, God of War, Horizon, Gran Turismo, Tekken, Ratchet & Clank and Spider-Man franchises.

However, in recent years Xbox has deployed a formidable new asset to make their brand more attractive: Xbox Game Pass. Best summed-up as "Netflix for video games," the pass allows gamers to play a large catalogue of hundreds of games for a monthly subscription fee which is far less than the cost of a single video game. With many people buying a game, playing it through once and never touching it again, such a service is hugely more attractive than a much bigger, one-off payment for a title of limited utility. The Xbox Game Pass is also platform-agnostic, being available not just on the Xbox console but also on PC, tablet and smartphones. Microsoft has even offered to make the service available on competitor consoles, including PlayStation and Nintendo Switch, indicating they see the Game Pass as being the future of their video game strategy rather than constantly escalating (and ever-more-expensive) hardware battles.

Simultaneously, Microsoft has gone on an immense spending spree, buying up video game studios by the dozen, to bolster their exclusive games library. This is an area where Microsoft has struggled, with only a small number of popular, exclusive franchises such as Gears of War, Halo and Forza. Their recent acquisition of Bethesda has given them access to several massive franchises, including Fallout, The Elder Scrolls and Doom, as well as critically respected series such as Wolfenstein, Dishonored and Prey. Their acquisition of Obsidian and inXile Studios has also given them access to credible studios with an interest in making challenging RPGs with reactive gameplay.

These moves seem to have given Microsoft a leg-up over the previous generation, resulting in a much closer race between Microsoft and Sony this time out. In addition, both consoles are being negatively impacted by global chip shortages leading to a lack of stock being available, with Microsoft perhaps edging it slightly with console availability, giving Microsoft a chance to make a better case for their console.

None of these things are fatal for Sony - whose dependence on their PlayStation range of products has increased dramatically in recent decades as their former dominance in the TV and hi-fi sectors has collapsed - but clearly they have the company somewhat rattled, and looking for steps they can take to compete.

Sony have their own subscription service, PlayStation Plus, as well as a streaming service called PlayStation Now, which allows gamers to stream PS games without a console at all, but both services feel limited compared to Xbox Game Pass and Sony has shown limited enthusiasm for turning the services into a real competitor. This is because Microsoft have a lot of financial firepower coming in from other quarters and are happier to become platform-agnostic, whilst Sony's business model does rely on their hardware becoming profitable, at least in the second half of its shelf life. Still, the competition of Game Pass will likely force Sony to develop these services further.

Sony have also taken the unprecedented step of making some of their former exclusives available on other platforms. Horizon Zero Dawn had a successful launch on PC in 2020, and Days Gone will launch on PC this year. The real test will be if Sony brings out the Uncharted or Last of Us series on PC, or the much-requested 2015 PlayStation exclusive Bloodborne, but there is no sign of this as yet.

Based on Schreier's report, Sony's main response to Microsoft's growing momentum is to double down on the areas where they are already strong: exclusive franchises developed by strong teams. To do this, they are reducing the number of sub-AAA games they're making, apparently dropping "small games that only sell in Japan" (a market that they've probably lost out to the Switch on anyway) and prioritising AAA blockbusters, as well as tightly controlling costs. It sounds like Sony are becoming incredibly risk-averse, which seems like a bad idea when the next generation of video games will require innovation and out-of-the-box thinking, even moreso than normal. The result has been a brain drain as developers at several Sony studios have quit.

Schreier's report does reveal some additional information of note: a thorough Last of Us remaster/remake for PS5 is currently in the works at Naughty Dog, with a remake of the original Uncharted possibly to follow. A fifth Uncharted game is also early in development, with some reports it might be a prequel. A Days Gone 2 has apparently been proposed and turned down, with the development team responsible for that game working on a new project instead.

Email ThisBlogThis!Share to TwitterShare to FacebookShare to Pinterest
Labels: microsoft, playstation, sony, the last of us, xbox