As part of a discussion on the works of George R.R. Martin, and specifically what works of his are not currently readily available in print, I ended up compiling this list of everything that GRRM has ever published (and almost everything that he's publicly admitted writing), which I'm now releasing here because, why the hell not?

This list is inspired by Leslie Kay Swigart's "George R.R. Martin RRetrospective Fiction Checklist", originally published in GRRM: A RRetrospective (2002, later reprinted as Dreamsongs in 2006) but is expanded to both include GRRM's unpublished work and also the work that has followed since.

Obviously, if I've missed anything, let me know and I'll update the list. 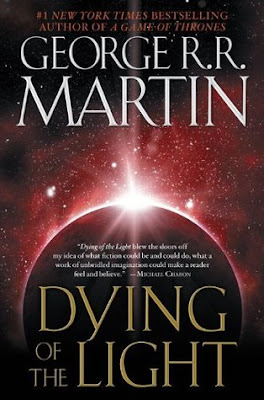 Dying of the Light (1977)
Martin's first novel, set in the Thousand Worlds milieu of much of his short fiction. Dying of the Light was originally called After the Festival and was serialised under that title in the April through July 1977 issues of Analog. The book was retitled with a Dylan Thomas quote. It was nominated for the Hugo Award for Best Novel in 1978, but did not win. The book mentions an alien race called the githyanki, a name "borrowed" by Charles Stross for a Dungeons and Dragons race, an association Martin did not learn of until twenty years later.

Windhaven (1981, with Lisa Tuttle)
Martin and Lisa Tuttle met in 1973 and became fast friends. They decided to collaborate in 1975, resulting in the novella The Storms of Windhaven, which won the Locus Award for Best Novella in 1976 and was also nominated for both the Hugo and Nebula. They followed this up with a sequel, One-Wing, in 1980, which was also nominated for the Hugo. At this point a deal was signed for a "fix-up novel" made up of the two stories and a specially-written third part, The Fall, which followed in 1981, along with the book version itself.

Fevre Dream (1982)
This was George R.R. Martin's first big success, a novel about vampires on the Mississippi. This was his first horror novel and was his most commercially successful novel until the publication of A Game of Thrones fourteen years later. The book was nominated for the Locus and World Fantasy Awards but not the then-famously-fantasy-avoiding Hugos.

The Armageddon Rag (1983)
This was the book that nearly destroyed Martin's writing career, bombing heavily on release (despite a World Fantasy Award nomination) and making publishers wary of touching any of Martin's other work. The most notable casualty was his then-in-progress novel, Black and White and Red All Over, which his agent couldn't sell and Martin left unfinished (the completed portion eventually appeared in the Quartet collection in 2001). However, publishing's loss was Hollywood's gain; Phil DeGuere optioned the novel for film and, although it was not made, it did bring DeGuere and Martin into contact and DeGuere remembered Martin which it came time to resurrect The Twilight Zone in 1985.

Hunter's Run (2007, with Gardener Dozois and Daniel Abraham)
Hunter's Run began life as Shadow Twin, a novella co-written between Martin and his long-time friend Gardener Dozois. Dozois and Martin worked on the novella in 1982 but eventually couldn't come up with an ending, sticking it in a drawer. Twenty years later Martin came up with the idea of giving the story to Daniel Abraham to finish. Abraham did so, very successfully, and it was published in 2004. Abraham then revised the entire story as the novel-length Hunter's Run, published in 2007.


A Song of Ice and Fire

You may have heard of this one.


A Song of Ice and Fire Universe

The Lands of Ice and Fire (2012, with Jonathan Roberts)
Also known as "A Big Box of Maps", with Martin drawing all of the original maps himself as line drawings and these being transformed into beautiful full-colour pieces by British cartographer-general Jonathan Roberts.

The World of Ice and Fire (2014, with Elio M. Garcia & Linda Antonsson)
The big companion book for A Song of Ice and Fire, originally called The World of George R.R. Martin's A Song of Ice and Fire before the publishers pointed out that this could not be fitted onto any book spine in the known universe. Martin wrote a bit too much material for this book (as in about 200% more words than originally budgeted), which he then mined to produce the novellas The Princess and the Queen, The Rogue Prince, Sons of the Dragon and...

Fire and Blood, Volume I (2018)
...this book, which acts as a history of the first half of the Targaryen regime. Already complete, it is planned for release in November 2018.

Fire and Blood, Volume II (forthcoming)
This second volume, covering the rest of the Targaryen regime, is completely unwritten at the moment and, according to Martin, will not be published until after A Song of Ice and Fire is complete and possibly more Dunk & Egg novellas are published, since it'll be very hard to produce a detailed history of the reign of Aegon V with spoiling those stories.

Black and White and Red All Over (started 1983)
This was Martin's in-progress work when The Armageddon Rag bombed. Martin's agent had been shopping the book around to publishers, but the Rag's failure saw them turn it down with a vengeance. Martin was disheartened, abandoned the book and spent some consolatory time playing roleplaying games (which wasn't a total waste, leading as it did to Wild Cards). The completed portion of the novel was published in the Quartet collection in 2001.

Avalon (started 1991)
Martin was 100-odd pages into writing Avalon, a big SF epic set on one of the most notable planets in his Thousand Worlds setting, when he was distracted by an idea he'd had about a deserter being beheaded in the snow, watched by a young boy and his family. That led to a tangent which, over a quarter of century later, remains unfinished. It's unclear if Martin seriously plans to finish Avalon once A Song of Ice and Fire is completed, but it's also notable that Martin has never published the material he had completed for the book (unlike his other unfinished novel, Black and White and Red All Over), suggesting he may have some plans for it in the future. 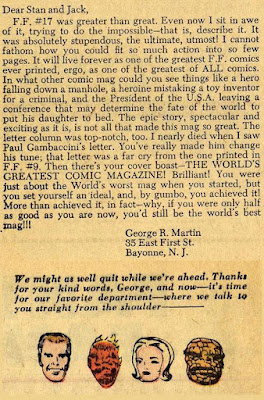 For the first two decades of his career, Martin was known predominantly as a writer of short stories, novellas and novelettes (the distinctions between which are really not worth worrying about now) and this is where he won his first awards. This list of stories is, as far as I can tell, exhaustive. Stories which are known to take place in the Thousand Worlds setting are noted with "TW", those published in the massive Dreamsongs: A RRetrospective collection with "DS".

Fanzine and Comic Work
The very first professionally-published work of Martin's was a letter to Stan Lee and Jack Kirby, published in Fantastic Four #20 (August 1963). He followed it up with a few more letters over the years, began corresponding with other fans and even attended the very first Comic-Con in New York in 1964. This led to Martin's first published writing, produced for a stream of comic fanzines on a very casual basis with very small distributions. It'd be fascinating to see if any of these stories had survived anywhere. Later on, starting with with 'Only Kids Are Afraid of the Dark', the stories have indeed survived. Three of these stories, written in the 1960s, did not appear in print until GRRM: A RRetrospective (aka Dreamsongs) got its first printing in 2003.


Professional Sales
Martin made his first professional sale in 1971 and basically never looked back, churning out dozens of stories through the 1970s and 1980s, winning several awards. In the mid-1980s his short fiction career slowed as he switched to working in Hollywood, editing Wild Cards and then commencing work on A Song of Ice and Fire; startlingly, for a prolific writer of the form, Martin has only published four short stories unrelated to A Song of Ice and Fire since 1991.

Wild Cards
George R.R. Martin created the Wild Cards superhero universe for a roleplaying game in the early 1980s, fleshing it out (aided by many writers, but most notably John Jos. Miller, Walter Jon Williams and Martin's co-editor, Melinda Snodgrass) for a shared world anthology series that currently clocks in at 27 volumes (and counting). Martin edited the entire series, but specifically wrote the following stories:


Novella-length excerpts from A Song of Ice and Fire

Other Song of Ice and Fire-related stories 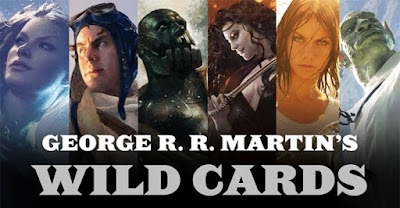 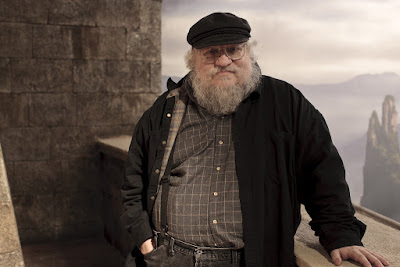 Beauty and the Beast

Thank you for reading The Wertzone. To help me provide better content, please consider contributing to my Patreon page and other funding methods, which will also get you exclusive content weeks before it goes live on my blogs. The Cities of Fantasy and History of Middle-earth series are debuting on my Patreon feed and you can read them there one month before being published on the Wertzone.
Posted by Adam Whitehead at 21:42

I think you left off "The Book of Swords" from his collaborations list.

George is just a contributor to The Book of Swords, he's not an editor. That's Dozois solo.

Good catch on the comic.

The Skin Trade should probably be on here. True it's a novella included in a couple of collections, but WSFA Press has published it as a standalone. Both a limited edition and trade hardcover.

I think you missed the Hiram Worchester parts of jokers Wild, which were also written by Martin, and The Journal of Xavier Desmond is in Aces Abroad, not Aces High.

Cheers for the Wild Cards corrections.

"Compleat" is an archaic-but-still-valid spelling which went through a spell of being oddly popular around the time that GRRM started writing SF (John Brunner comes to mind most notably) in the 1970s.

Adam, first of all, your list is of great help to me, congratulations for the job!
I am writing for an upcoming brazillian website dedicated to ASOIAF and I'm trying to create a reference to Martin's other works, since I'm in love with the older stuff. So, maybe you could help me with something: I found info that Starlady was originally published in 1976, and that's according to your list BUT I can't find where it was published, only the 2008 book together with Fast Friend. Do you have any info about that?
Thanks so much!

STARLADY was published in "Science Fiction Discoveries", an anthology edited by Carol and Frederick Pohl and published by Bantam in 1976.

You seem to have confused 'The Added Safety Factor' and 'Protector(s)' - according to 'Dreamsongs' the former was rewritten and eventually published as 'Warship'. Whether 'Protector(s)' was ever published in some form I don't know.

Writing/Completion dates on some of the older stories also seem off, most notably for 'The Hero' which was completed - according to 'A Song for Lya' - in February 1969, indicating that George's creative writing class started in autumn 1968 and stretched into 1969, indicating that the other stories growing out of that class were written in 1968-69, not just in 1968.

GRRM‘s very rare (AFAIK) story „A Peripheral Affair“ can be found here (on an American fansite) and in my German translation here:

„A Night at the Tarn House“ can be found here (oh the same fansite as above) and here on Clarkesworld, and my German Translation is here: