Scott Lynch on THE THORN OF EMBERLAIN

The Helsinki Times caught up with fantasy author Scott Lynch whilst he was at WorldCon in Finland last month. They chatted about his fantasy series, The Gentleman Bastard, and Scott's inspirations and future plans. 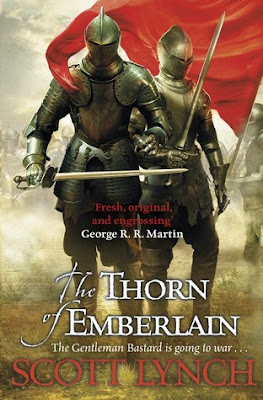 Scott confirmed that the fourth book in the series, The Thorn of Emberlain, should be finished before the end of the year and then published next year. He is very happy with how the book has turned out, and notes that it marks a major shift in the series. Originally Thorn of Emberlain was supposed to be where the series starts, but he couldn't make the characters work without more backstory, so The Lies of Locke Lamora, Red Seas Under Red Skies and The Republic of Thieves were essentially written as prequels.

The Thorn of Emberlain introduces two new factors to the series: Emberlain itself as a sort-of permanent new base for our characters, instead of each subsequent book featuring a new city, and Anton Strata as a new major character, a teenage claimant to the throne of the Kingdom of the Seven Marrows whose ascent is tested by Locke and Jean's latest scam.

Lynch also expands further on his love of Japanese RPGs and his appreciation for the mighty Matt Stover.
Posted by Adam Whitehead at 18:04

"The Thorn of Emberlain, should be finished before the end of the year and then published next year."

Was there not an update early in the year where he said he was done but just had to write the ending? I know that he's had health issues, but still another disappointing delay.

Has there been any word on whether or not ToE has been finished?

Nope. I'd have (hopefully) caught that if there was.

Was there any news about the end of ToE?