Earth has survived an attack by the alien Xindi. The crew of the NX-01 Enterprise have been hailed as heroes, but Earth is also in the grip of anti-alien xenophobia, fanned by a terrorist organisation known as Terra Prime. There's also growing tensions between the Vulcans, Andorians and Tellarites, with Earth caught in the middle...and an unseen enemy manipulating events from behind the scenes. 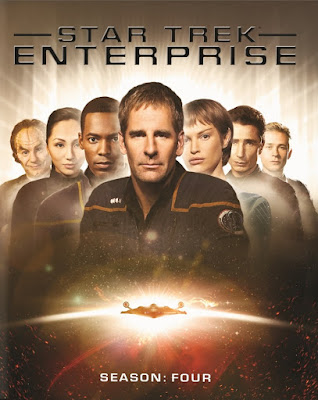 The fourth and concluding season of Star Trek: Enterprise is the moment when the show finally starts fulfilling its premise. For its first two years the show seemed to too often disregard the potential of its setting in favour of doing too-traditional Star Trek stories, just with less advanced technology. In the third season the show adopted more long-form storytelling that made it more dynamic and interesting, but still had problems with pacing, not to mention telling a story that had nothing to do with the show's reason for existing. This final season finally lines everything up just right to deliver the most consistently excellent season of Trek since the end of Deep Space Nine.

The season is divided up into several multi-episode arcs. The first quickly disposes of the Temporal Cold War, an ill-thought-out plot device that hamstrung the first two seasons of the show. Very quickly the show moves into stories tying together the augments (the genetically-engineered descendants of Khan) into the humanoid-looking Klingons of the original series (a story that really didn't need to be told, but isn't awful) with other stories bringing in the Romulans as masterminds of a plot to thwart the growing relations between the eventual founders of the Federation. Other episodes involve a social revolution on Vulcan (including an appearance by a young T'Pau, a fan-favourite character from the original Star Trek) and, most effectively, a two-parter entirely set in the Mirror Universe. Another multi-part story revolves around the last gasp of fascism on Earth and its final defeat, setting the scene for Gene Roddenberry's utopian vision to come to pass.

The result is a relentlessly enjoyable season of television. It's still not the sharpest-written season of Star Trek, let alone SF in general, and the fact this season aired alongside vastly superior first season of the rebooted Battlestar Galactica probably did it no favours, but removed from that context it stands up pretty well. This Enterprise as it should have been from the start, deftly mixing together original stories with the established history of the Star Trek canon and having fun in the process. The writers and cast are clearly having more fun than they have in previous seasons and that joy finds its way onto the screen.

Of course, there is a big "but" in all of this. There are a few weak episodes this season, and the few stand-alone episodes peppered between the two and three-parters are mostly forgettable. There's also some problems within the longer arcs. The augment story is too long and mostly unnecessary: it tries to explain what happened to genetically engineered humans after Khan, a story already adequately explained on Deep Space Nine, and it laboriously tries to explain why Klingons looked different in the original series, a story, er, already adequately explained on Deep Space Nine. There's also a bafflingly pointless story which tries to mine drama from Trip's decision to leave Enterprise permanently (hint: he doesn't), which is undercut by the fact that no-one cares.

Worse, and most famously, is the season and series finale, These Are the Voyages. This episode is framed as a flashback from Star Trek: The Next Generation with Riker weirdly consulting a holo-programme about Enterprise's final mission to justify some personal decisions. This is an insult to the cast and crew of Enterprise, putting too much focus on TNG characters rather than the show that is actually ending, and feels forced. The episode is ill-conceived, badly-written and lacking in tension and drama, making it easily the weakest Star Trek series finale since Turnabout Intruder (and at least the writers of that episode had the excuse they didn't know it was the finale).

Still, at least it's a single really awful episode in a season featuring some stand-out and, in the form of the In a Mirror, Darkly episodes, a genuine classic two-parter. Overall, the fourth season of Star Trek: Enterprise (****) is thoroughly enjoyable and shows the potential of this show that went unrealised for so long. The season is available on Blu-Ray (UK, USA) and on Netflix in the UK and many other parts of the world.
Posted by Adam Whitehead at 13:38