Gaia is a vast and exotic world, ranging from the freezing arctic north to the lush forests and burning deserts of the Western Continent. Many interesting races and people inhabit this world, and the greatest and most famous of its cities can be found on the Eastern Continent: Midgar, capital of the lands dominated by the Shinra Corporation.

Midgar as it will appear in the upcoming Final Fantasy VII Remake.

Midgar is located near the north-western coast of the Eastern Continent, north of Junon and south-west of Kalm. It is located close to the Western Ocean, which is dominated by Shinra’s warships and cargo vessels, which constantly keep Midgar supplied from the mines on the Western Continent. Cost del Sol, a beautiful port city due west of Midgar across the ocean, is a popular getaway and retreat for senior Shinra officials. 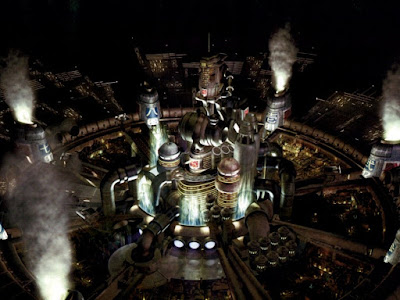 Midgar as depicted in the original 1997 release of Final Fantasy VII.

Midgar was originally a network of villages and towns of wooden and stone buildings, linked together by roads and surrounding relatively fertile farmland. After Shinra ascended to power and rapidly developed high technology, by pursuing a mix of scientific research and magical exploitation of materia (magical crystals), they constructed a new city directly over the old towns. The “new” Midgar consists of a massive circular dish with many buildings built on top, suspected directly above the “old” city below (which is now left in perpetual gloom). The surface-dwelling inhabitants of Midgar disparagingly refer to the new city above them as a “pizza”.

The new city of Midgar is suspended by a single, massive pillar and other supports located around the edge of the dish. The dish is divided into nine sectors, with massive Mako Reactors located between each sector. The Reactors fuel the enormous, power-hungry city, but the area around Midgar has gradually become more barren and lifeless as a result. According to the freedom fighters known as AVALANCHE (dismissed as terrorists by Shinra), the Reactors are draining the life force of the very planet itself and will eventually turn all of Gaia into a desert, but Shinra dismisses this claim.

Sectors 1-8 run around the dish, whilst Sector 0 is located at the very centre. Shinra Headquarters, a massive skyscraper and Mako Reactor, is located in the middle of the dish.

The slums below the “pizza” are where poorer residents of the city live. Climbing from the slums to the main city is possible via the central pillar or the city’s train system, which carries workers from below the city to their work places on top. There is an elevated freeway which runs around the city and then descends to ground level outside.

A subterranean city, Deepground, is located in the bedrock below even the slums. Its existence is relatively little-known.

The total size of Midgar is unclear, but it appears to be several miles across.

The population of Midgar, at least prior to the Meteor/Jenova incident and the downfall of the Shinra Corporation, appears to be comfortably in the tens of thousands and possibly hundreds of thousands. Midgar is the largest and most technologically-advanced city on the planet. 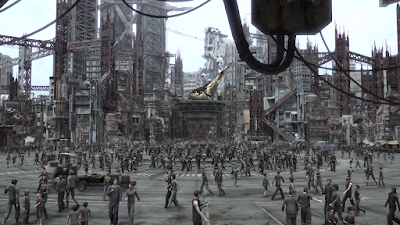 The Shinra Corporation evolved out of Shinra Manufacturing Works, a company specialising in weapons manufacturing. When Shinra discovered how to convent the planet’s Lifestream into Mako energy, they began building Mako Reactors all over the globe. This further propelled both their scientific research and technological advancement, resulting in the development of many powerful weapons, advanced vehicles and other wonders…and terrors.

The town of Wutai rejected Shinra’s proposal to build a Mako Reactor near their settlement, resulting in a nine-year war. During this time Midgar was constructed by Shinra over several pre-existing towns in a relatively defensible part of the eastern continent, becoming both Shinra’s capital and also its greatest achievement. The Wutai War ended in a Shinra victory, but survivors of the Wutai forces and other groups opposed to Shinra’s ultra-capitalist ideology – and horrified by the growing evidence that the Mako Reactors were sapping the Lifestream of the planet – joined forces to form AVALANCHE, a rebel organisation dedicated to destroying the Mako Reactors.

The first incarnation of AVALANCHE operated out in the countryside, hitting isolated reactors (such as the one at Corel). This group become more hardline and ruthless until one member, a scientist named Fuhito, considered the sacrifice of humanity itself to be a worthwhile consequence of destroying the Mako Reactors and saving the Planet. He tried to summon a powerful magical force named Zirconiade to wipe out Shinra forever, but was stopped and killed by the Turks, Shinra’s special operations combat team.

Barret Wallace, a native of Corel, worked with the Turks to defeat AVALANCHE, but was horrified when Shinra laid waste to Corel in retaliation, killing his wife and (apparently) his best friend. Swearing vengeance, Barret moved to Midgar and restarted AVALANCHE as a freedom-fighting organisation. This second version of the rebel group avoided civilian casualties where possible, but sometimes they were incurred. During this period Barret allied with a young, canny fighter named Tifa and her childhood friend, a former Shinra soldier named Cloud Strife.

The conflict between Shinra and AVALANCHE became quite intense, to the point where Shinra destroyed the Sector 7 pillar and dropped the entire sector onto the slums below, including the districts where AVALANCHE’s headquarters were located. Most of AVALANCHE was wiped out in this attack and AVALANCHE were blamed for the cataclysm, which caused thousands of casualties. Barret, Cloud and others launched a retaliatory strike on Shinra Headquarters. During these events AVALANCHE learned of a much more sinister series of experiments going on behind the scenes, involving the Ancients, the mysterious progenitor race who nearly destroyed the world two thousand years earlier. Sephiroth, the former Shinra military commander (and Cloud’s mentor), liberates the team after they are captured and kills President Shinra before escaping with the remnants of one of the Ancients, Jenova.

Eventually it was revealed that Sephiroth (sometimes possessed by Jenova, sometimes acting on his own) planned to use the fabled Black Materia to summon a massive Meteor to devastate Gaia. The planet’s Lifestream would respond to heal the wound and Sephiroth would seize the resulting flow of power for himself. Working together, the former members of AVALANCHE (helped, if unwittingly by Shinra) defeated Sephiroth and destroyed the Meteor; unfortunately, in the final battle Midgar was partially destroyed.

After the final battle, Midgar was repopulated. The overhanging main plate had mostly been obliterated, opening the city up to the sky once again. The governance of the city was disputed between the surviving remnants of Shinra and other factions, but eventually the World Regenesis Organisation was formed by several groups to take over governance (in a fairer, more democratic form and help the planet heal from the immense damage wreaked upon it). 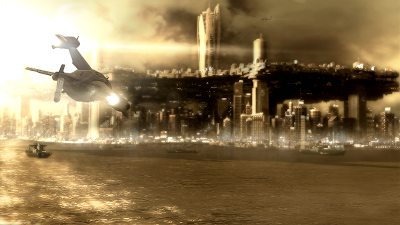 Origins and Influences
The city of Midgar first appeared in the iconic, classic video game Final Fantasy VII (1997). During the writing and planning of the game, the team at Squaresoft briefly considered setting the game in the real world, with New York City being the main city. This was a significant shift from the previous six games, which were each set in a new, original fantasy world. Ultimately, the team decided to continue in this vein and created a new planet, Gaia, for the game, although some of the original ideas for a New York game did resurface in Parasite Eve.

However, the team did like the idea of starting the game in a large metropolis, not dissimilar to modern-day cities. This would continue upping the technological level of the series (which had previously moved from a traditional, medieval setting to steampunk) and give fans something new to experience. As the first game designed for the original PlayStation, it had a much more ambitious design than the previous games, with lots of complex, dazzling CGI cut scenes.

Art director Yuusuke Naora was given the task of design Midgar and early on moved it away from the New York concept. He hit on the idea of making the city look like a “pizza” early on and this went down well with the rest of the creative team. Nods to this inspiration can be found throughout the game, with Mayor “Domino” and his deputy Hart (Hut) being named after pizza chains.

Some fans interpret this to mean that Advent Children and Dirge of Cerberus take place before the final abandonment of Midgar (hence the last FF7 cut scene); others suggest that the ending of FF7 itself has simply been retconned out of existence.

Although these are the only canonical appearances of Midgar, various other games feature “cameos” from the city, such as the FF7-themed battle arenas in the various Super Smash Bros. games.

In 2018 or (more likely) 2019, Midgar will return in Final Fantasy VII Remake, an ambitious, modern remake of the original game with all-new graphics, gameplay and technology.

Midgar is important as a fantasy city that eschews many traditional fantasy elements altogether, instead appearing primarily as a modern city of skyscrapers and towers (albeit suspended in the air above more traditional, medieval fantasy structures), with characters driving cars, taking trains and riding bikes into battle. This moves on even from “steampunk” into a more contemporary form of fantasy, little-explored by fantasy novelists. Square would go on to explore this theme of “contemporary fantasy” even further in Final Fantasy XIII and XV.

In terms of cities most directly influenced by Midgar, the most obvious is Hengsha in Deus Ex: Human Revolution. In this game – created by Western studio Eidos Montreal but published by Squaresoft’s successor company, Square Enix – the Chinese have built an entire utopian sky city above Hengsha Island (just off the coast around Shanghai), suspended over the city below by immense towers. The undercity has become a place of crime, squalor and corruption, whilst the city above is far more beautiful and seemingly perfect.

Midgar is an idea ahead of its time, a city of literal and geographic divisions and levels which reflect the ideological and political divisions riven through its society and through the story. It remains, twenty years on, one of the most iconic video game fantasy cities ever created.

Thank you for reading The Wertzone. To help me provide better content, please consider contributing to my Patreon page and other funding methods, which will also get you exclusive content weeks before it goes live on my blogs. The Cities of Fantasy series is debuting on my Patreon feed and you can read it there one month before being published on the Wertzone.
Posted by Adam Whitehead at 21:03