Oceanside, California. High school student Dylan Maxwell is expelled after twenty-seven cars in the school parking lot are vandalised with phallic images, Dylan's trademark graffiti style. Whilst Dylan usually admits and boasts of his pranks (and even films them for his YouTube channel), in this case he vehemently protests his innocence. Fellow student and budding documentary-maker Peter Maldonado identifies several discrepancies in the account of the crime and, inspired by web series Serial, sets out to prove Maxwell's innocence with a thorough and painstaking examination of the evidence. 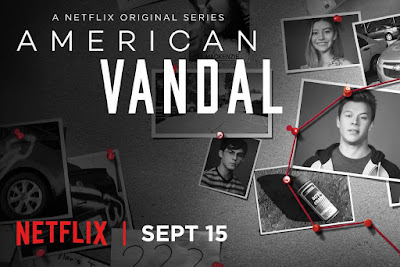 American Vandal is a mockumentary which merges the familiar Spinal Tap/What We Do in the Shadows format with the recent emergence of high-profile, true-crime documentaries such as Serial and Making a Murderer. At first glance it's a dumb comedy where the crime isn't a bloody murder but a kid vandalising a few cars for kicks, with a lot of early humour mined from the differing techniques for drawing male genitalia and the use of ludicrously elaborate CGI reconstructions of the crime. However, the show quickly changes tack and moves into a slightly more serious examination of high school, relationships, social media, memes and how decisions made at a young age can affect someone's entire life.

The central conceit is that Maldonado and his friends Sam Ecklund and Gabi Granger are filming a documentary about the crime both as a project and also a way to prove Maxwell's innocence. They don't particularly like Maxwell, but the pedantic Maldonado in particular seems irritated that the biggest problem with the idea that Maxwell committed the crime - that he's dumb as a box of frogs and couldn't possibly blank the security cameras covering the parking lot - doesn't seem to have registered with the teachers who are all too eager to get rid of a known troublemaker. A lot of easy humour is mined from the fact that Maxwell is not a particularly bright guy, but this blows up later on when he sits down to watch the documentary, when it becomes suddenly and searingly painful to watch.

American Vandal is an odd show in tone: it's very funny, with usually several stand-out comedic moments per episode. It's also, bizarrely, quite gripping: the central mystery is mind-bogglingly inane but the reconstructions of the crime, the painstaking character analysis of each person involved and the way new evidence is discovered just as leads seem to be drying up, leading into the next episode, gives the series a strong moreish quality. Most successfully, it's got some very well-written characters, portrayed by some extremely talented young actors. Most successful spoofs have to be as good as the thing they are spoofing, and American Vandal is certainly that.

Weirdly, I was often reminded of the novel and movie Battle Royale whilst watching this show: that story was about a bunch of high school students forced to fight one another to the death on a remote island, but if you ignored the trappings it was really about school relationships, the intensity of youth (when everything is Vitally Important and social status is everything) and how societies remain the same even in wildly different circumstances. American Vandal does the same thing, with its examination of the crime also exposing the social conflicts across the school, amongst both the students and teachers. Relationships, ambitions, hopes and darker secrets emerge over the course of its eight half-hour episodes. The silly banter of the kids and their rather under-developed senses of humour ring true, and the show strikes just the right balance of authenticity; only the hyper-elaborate CGI scenes don't really fit in, although you can perhaps accept them as having been added later after Maldonado's project goes viral and gets picked up by a network.

There are several twists and the final episode is pretty stunning: it inverts some of the places you expect the characters to go and you realise just how good some of these actors really are, especially two of the actresses in supporting roles who out of nowhere deliver powerful, screen-dominating performances when the story intensifies towards the end. Of the two central questions in the series, one is definitely resolved but the other is not (although Maldonado hits on a theory that he feels is "90% convincing" and probably is the answer, but with just enough doubt left behind), which feels appropriate.

American Vandal's first season (****) starts off as a dumb high school comedy mockumentary - American Pie by way of Making a Murderer - but very quickly outgrows that to tell a series of stories about a group of high school students that are alternatively funny, tragic, sweet and dramatic. By the time you get to the end, you could probably care less who "drew the dicks", but you will want to know more about these characters. The show is available now on Netflix. A second season is in the planning stages but has not been commissioned yet.
Posted by Adam Whitehead at 22:18