An uncontrollable force has been unleashed on the Eros asteroid settlement, killing over a hundred thousand people. Eros has been quarantined whilst Earth, Mars and the Belt each blame one another for starting the crisis. But Jim Holden and the crew of the Rocinante know the truth, that what they are dealing with is far more powerful and far stranger than anything humanity has encountered so far. When Eros moves out of orbit and a recurrence of the crisis takes place on Ganymede, the Solar system moves to the brink of war. 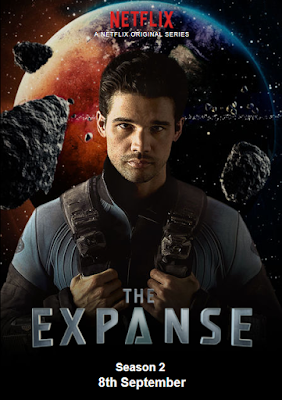 Season 1 of The Expanse was the most satisfying slice of overtly science fiction drama seen on TV in many years. It was superbly-written and well-crafted, with fantastic production values and an absolutely stellar cast doing great work. Season 1 was undercut by pacing problems - a very slow first few episodes and then a mad rush at the end - and also a curious structural decision not to cover the entire first novel in the first season, but hold off on the book's ending until the start of Season 2, which both finishes Leviathan Wakes and covers part (but again, not all) of the second book, Caliban's War.

Season 2 of The Expanse shows that this decision had some merit: unlike the more relaxed first season, Season 2 starts with a bang and never lets up. For thirteen episodes on the trot, the story moves quite fast but also knows when to take the foot off the pedal for an important moment of characterisation or worldbuilding or simple beauty. The Expanse's CGI budget is clearly enormous and the show deserves credit for taking moments out of the action to show the haunting, empty beauty of space, the mind-boggling view of Jupiter from one of its moons or show sweeping shots of New York City two centuries from now.

Like the first season, the actors continue to knock it out of the park, particularly Thomas Jane as Miller and Wes Chatham as Amos, the letter coming into his own as he sells Amos's very complex motivations and personality issues with a minimum of fuss. Shohreh Aghdashloo continues to steal every scene she's in as Avasarala, especially now she moves into the Caliban's War story arc and actually has an active storyline to pursue. SyFy also clearly lifted the restriction on swearing between seasons, as she now employs the kind of invective she does in the books (if not quite as frequently). New addition Frankie Adams (as Martian marine Bobbie Draper) also does great work, although the split of the storyline means she spends a bit too much time as "blind patriot grunt" Bobbie rather than the more nuanced character she becomes later on. But Draper has presence and charm in the role. Terry Chen is also good as Prax, a POV character from the books who has a somewhat smaller (but still important) role on the show.

The season continues to explore the aesthetics of the first season, depicting space as dangerous and simply flying from point A to point B can be long, hard and extremely hazardous. Space battles have bits of metal flying through hulls with ease (meaning that it's rarely necessary to completely destroy enemy ships, just fillet them with gunfire so the crew can't breathe any more). The space battle between the Rocinante and the enemy stealth ship in close quarters around a space station is particularly gripping, with the CGI being utterly outstanding. The marine training exercise on Mars is also exceptional, although it's a shame we don't see the iconic battle on Ganymede in as much detail. In other areas the effects are a bit more limited, particularly the ocean view scenes in New York which look pretty fake.

What the second season does do very well is depict the politics of two great superpowers on the brink of war and the constant politicking and brinkmanship required to maintain the peace, and the impact of those decisions on the little people, with the fates of millions depending on the whims and horse-trading of people tens or hundreds of millions of miles away. Apart from Avasarala (who often isn't in as much control of circumstances as she'd like to think), our heroes are mostly at the short end of events, having to scramble to put out fires caused by others elsewhere, but in certain moments (usually involving Holden making an Important Announcement on the radio) they fight back.

It's a rich show that packs a lot into its episodes and its second season has almost no major problems at all, except maybe that the finale, which takes place about two-thirds of the way through Caliban's War, doesn't really have a big season-ending event (it's actually the fourth episode of the season which is the most epic). But then overcoming that cliche is quite enjoyable in itself.

The second season of The Expanse (*****) is the most satisfying space-set SF drama since arguably the second season of Battlestar Galactica over a decade ago, mixing politics, ethics, fine characterisation and nodding at the real science of space travel in a very satisfying manner. It is available on DVD and Blu-Ray in the United States, and is on Netflix in the UK and Ireland (and many other territories). Season 3 has been commissioned and will air on SyFy in the United States in 2018.
Posted by Adam Whitehead at 15:57

Should I read the books or should I watch the series? I'm interested but so far I haven't done either.

The casting of Bobby Draper has me ready to drop the show. The actress is awful.

You could read the books first (six out already, Book 7 lands at the start of December) and then watch the show. They're pretty close, but the TV show changes the timeline a little bit so major characters from later in the books show up earlier.

DAMN, but I've been looking forward to this!! Even more than GoT B-)

Allan, her writing is awful, not the actress. She isn't given much to do except be a jarhead for most of the season. When she gets stop being gung-ho for two seconds, she does shine through much more (cucumber sandwiches, nom nom nom!)

Thank you! I think I'll get the first book and see how I like it, then decide if I want to continue with the books or just start watching the TV show, which is bound to be less demanding than a long book series.