Fade to Black by Francis Knight

The city of Mahala is located in an enclosed pass, the city built up the sides of the mountains over hundreds of years. Ravaged by plague, magical chaos and religious discord, the city is barely ticking over, relying on the mysterious substance 'Glow' to power its machines. Rojan Dizon, a private investigator and secret mage, is forced to go deep into the underworld to find his missing niece, but what he will find there will transform the future of the city. 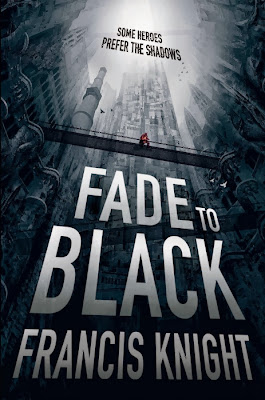 Fade to Black is the debut novel by Francis Knight and the first in the Rojan Dizon trilogy, which continues in Before the Fall (out now) and Last to Rise (out in November). It mixes elements of 'magepunk', steampunk and urban fantasy to create something that could be new and innovative, but which fails to fulfil its full potential.

Which is not to say that the book isn't fun along the way. The novel uses a mixture of fairly familiar archetypes for its characters, from Rojan himself (hard-boiled mage detective, useless at relationships or managing money, lives for one-night stands and occasional alcoholic over-indulgences) to Jake (ice-queen warrior with trust issues) to, well, everyone really. However, the author gives the characters enough depth and backstory to make them convincing, even if they often remain familiar.

The book makes much of its setting (not least on the impressive cover), a vast vertical city built in a narrow mountain canyon. Mahala isn't exactly the next Ankh-Morpork or New Crobuzon as far as iconic fantasy cities go, but it serves reasonably well, with effective descriptions of vertiginous drops, seedy bars and cramped shops. The worldbuilding is interesting, if at times confused: characters are simultaneously told that there is nothing interesting outside the city, but also retain a fairly detailed knowledge of the neighbouring kingdoms and their economic dependency on Mahala. This is a contradiction which Knight satisfyingly ties up in the sequel, but in this first volume just seems confused. What works better is the magic system, which is based around the application of pain. The way magic works seems logical and well thought-through, with some interesting applications that become clearer (and more disturbing) in the latter half of the novel.

Where the novel threatens to unravel completely is the completely over-the-top ending, in which plot revelations that would be acceptable in isolation are stacked on top of other, more ludicrous and cliched revelations until the whole thing teeters on the edge of collapse. It's only Knight's skill in getting through the plot twist overload and establishing a potentially strong new set-up at the end of the novel that leaves the reader with hope that future books won't be quite so implausible. Fortunately, a third of the way through the sequel, it does appear that Knight's writing skills have improved between the two books.

Fade to Black (***) mixes potentially strong and fascinating ideas with occasionally dubious execution and the employment of a few too many fantasy stand-bys. The ending borders on the silly, but the author just about manages to hold everything together to deliver a fast-paced, enjoyable read (if you don't think about it too much). It is available now in the UK and USA.
Posted by Adam Whitehead at 14:00

Thanks for the review Adam.I have read book 2 in this series and it's marginally better than book 1.I will be reading the last book in the series to see how it all ends.

I've been eyeing these books for a while. Wonderful review. Might just give it a read soon!