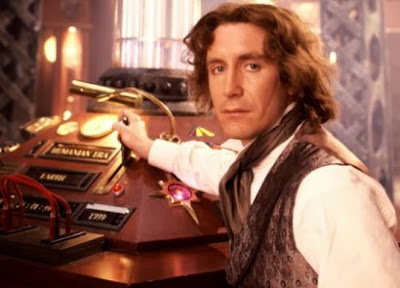 Paul McGann (1959-  ) played the Eighth Doctor in just one 90-minute TV movie and a seven-minute 'webisode', making him the Doctor with the least number of on-screen appearances. However, he was regarded as the 'current' Doctor for the period 1996-05 and has also appeared in 66 audio dramas as the Eighth Doctor, the most recent in 2012.

When Doctor Who went off the air in 1989, officially it was on a longer-than-normal hiatus that would end once the BBC found an independent production partner to help shoulder the financial burden of making the show. Whilst discussions were held with UK partners, the BBC also spoke to American producers in the hope of making a big-budget show able to compete with the likes of Star Trek. In 1994 the BBC, Universal Pictures and an ex-pat British producer living in Los Angeles, Philip Segal,struck a deal for Segal to develop a script he could shop to American networks. John Leekley, an American studio writer working for Universal, was assigned to write the actual script.

The original plan had been for a complete reboot of the Doctor Who continuity, with the new series opening with an origin story for the Doctor. It was with this script that the first casting calls for the new Doctor were held. Despite the reboot concept, Segal was keen to retain a British actor in the title role. Rowan Atkinson and Derek Jacobi were considered for the role, whilst Jim Carrey's name was touted in the press (Carrey's movie career made this highly improbable as a realistic consideration, however). Also auditioning were two relatively unknown actors from Britain (at least in the USA), Mark McGann and his older brother, Paul. After some consideration, Paul McGann won the role.

CBS briefly considered the project, but it was eventually picked up by Fox. Fox, unexpectedly, proved keen on retaining the old show's continuity and also assigned a new writer, Matthew Jacobs. Jacobs had an interesting Who connection: his father Anthony had played Doc Holliday in the 1966 serial The Gunfighters and Matthew had visited the set as child. The script was completely re-tooled and now included an opening sequence in which Sylvester McCoy reprised his role as the Seventh Doctor (a BBC suggestion that Tom Baker - by far the best-known Doctor in the USA - be featured instead was firmly rejected by Segal). The Master returned as the main villain (Terry Nation was not keen to let the Daleks be used, although they are referenced), now played by well-known American actor Eric Roberts. 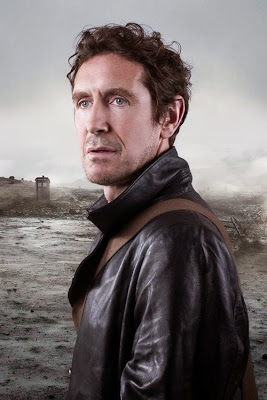 Paul McGann in recent publicity photos for the Doctor Who audio range.

The TV movie was broadcast in the UK and USA in May 1996. In the United States the reception was underwhelming, with disappointing viewing figures. The UK transmission was altogether more successful, with more than 9 million viewers tuning in (to the BBC's surprise). Critically, the production was criticised for being too 'Americanised' and Eric Roberts's performance as the Master was particularly savaged. The suggestion that the Doctor was half-human was also roundly condemned by the fandom (and later flatly rejected by the new series). However, the continuity nods to the UK series, the use of Sylvester McCoy, the set design of the TARDIS and, above everything else, Paul McGann's performance as the Doctor were all extremely well-received by the fans.

The transmission of the new TV movie, combined with the sad death of Third Doctor Jon Pertwee just a few days earlier, resulted in a resurgence of interest in Doctor Who. When Fox dropped plans for a follow-up series, the BBC began exploring options to remounting the series by themselves. Ultimately, this took a lot longer than they expected but did eventually result in the show returning to the screens in March 2005. Russell T. Davies, the producer who resurrected the show, chose not to retain McGann, instead preferring with a clean slate with a new Doctor.

Whilst he only appeared on-screen once, McGann remained (and remains) an enthusiastic supporter of the series and his role in it. From 1996 to 2012 he appeared in 66 audio dramas and radio plays for Big Finish and the BBC, whilst BBC Books published 73 novels in the Eighth Doctor Adventures range (which follows up Virgin Publishing's The New Adventures) between 1996 and 2005.

There is a notable continuity gap involving the Eighth Doctor: he is the only Doctor we have not seen regenerate on-screen (arguably excepting the Second/Third Doctor transition, though the immediate aftermath was depicted), nor the reasons for it given. Fan speculation is that it was the Eighth Doctor who fought in the Time War against the Daleks, and regenerated into the Ninth Doctor (Christopher Eccleston) at its conclusion. However, the forthcoming 50th Anniversary special (which McGann will not appear in) will apparently reveal this was more complicated than previously thought. 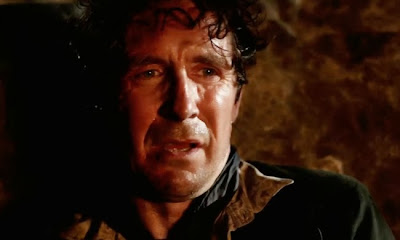 The Eighth Doctor just before his regeneration into the 'War Doctor'.

Update: On 14 November 2013, the BBC released a special 'webisode' promoting the 50th anniversary special, Day of the Doctor. The webside unexpectedly featured the return of Paul McGann as the Eighth Doctor and depicted his regeneration into the unnumbered 'War Doctor' played by John Hurt.

The Eighth Doctor was severely wounded whilst on a spacecraft that crashed into the surface of Karn, a planet in the same system as Gallifrey. The Eighth would have died instantly, but his life was prolonged by the enigmatic Sisterhood of Karn, who allowed him to choose the form of his next regeneration. The Eighth Doctor decided that his decision to remain aloof from the nascent Time War had been wrong, and chose the form of a 'warrior'. He regenerated into this form, which is not formally counted as one of the 'Doctor's incarnations because of his warlike nature.
Posted by Adam Whitehead at 13:50

I quite liked the movie, and thought Paul did a fantastic job.

On the one hand it's a shame it never got picked up as a series, but it's probably for the best as far as the show's legacy is concerned.

Somehow, I just can't see Fox as the caretakers of the canon.

He was great Jason. At the time I didn't know much about Doctor Who, but now we can appreciate what an amazing performance it was. The movie itself is insanely cheesy, but still fun. A nice retrospective.