Preview of AN ADVENTURE IN SPACE AND TIME

The Radio Times has posted publicity pictures of An Adventure in Space and Time, a one-off TV drama about the commissioning and creation of Doctor Who in 1963. The drama stars David Bradley (Harry Potter, Game of Thrones) as William Hartnell (who played the First Doctor) and is currently expected to air on Friday, 22 November, the day before the show's 50th anniversary. 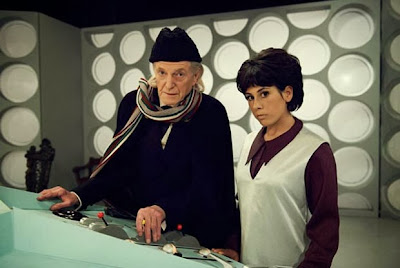 David Bradley as William Hartnell (the First Doctor) and Claudia Grant as Carole Ann Ford (Susan), on a faithful recreation of the original TARDIS set.

The drama also stars Jemma Power as Jacqueline Hill, Jamie Glover as William Russell, Claudia Grant as Carole Ann Ford, Sacha Dhawan as Waris Hussein, Jessica Raine as Verity Lambert, Sarah Winter as Delia Derbyshire, Nicholas Briggs as Peter Hawkins, and Brian Cox as Sydney Newman. The real William Russell and Carole Ann Ford also have cameo appearances, whilst Reece Shearsmith will play the then-future Second Doctor, Patrick Troughton (who was a friend and colleague of Hartnell's, and was recommended by Hartnell to be his replacement).
Posted by Adam Whitehead at 12:28

Email ThisBlogThis!Share to TwitterShare to FacebookShare to Pinterest
Labels: an adventure in space and time, bbc, doctor who, doctor who at 50