The Year of the Ladybird by Graham Joyce

It's the hottest summer on record and Britain is infested with an invasion of ladybirds. A young man named David takes up a job at seaside holiday resort in Skegness, keen to escape the future mapped out for him by his stepfather. His choice of Skegness is informed by the fact that this was the last place visited by his real father before his disappearance. David is caught in a bizarre love triangle whilst he is visited by disturbing visions of a man on the beach, and Britain is caught on the cusp of a new era. 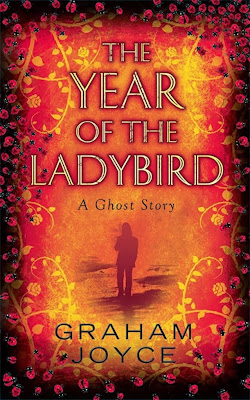 The Year of the Ladybird is the latest novel by Graham Joyce. I've read two of his previous novels, The Tooth Fairy and The Silent Land, and both were haunting, well-written and deeply atmospheric works which provided much food for thought. The Year of the Ladybird shares some of the strong points of these novels but ultimately is not quite as effective a book.

Early chapters see David arrive at the holiday camp and take up his duties, which are described in considerable detail. Like his publisher-mate Christopher Priest, Joyce has the knack of taking the mundane and making it interesting, through clever prose or by imbuing the ordinary with the hint of the extraordinary. 1976 was a year of great social change in the UK, with an explosion in popularity of the white supremacist National Front party and the country in economic turmoil, with the arrival of punk music (and the associated changes in British culture that would come with it) just around the corner. Combined with the remarkable heatwave of that year and the ladybird invasion, this gives Joyce a great setting for a book about a young man trying to come to terms with himself and his own past.

However, the novel is highly restrained and David is fairly reactive as a protagonist. His bizarre encounters with a strange man on the beach are disturbingly-written, but ultimately David shrugs them off and gets on with his life. His romantic dalliances (with a married woman who isn't what she appears to be, and later a much healthier relationship with one of his female co-workers) form much of the spine of the book, but are not imbued with much drama. A misunderstanding which leads David to accidentally attend a National Front meeting at a pub appears to start a new plot thread, which again just tails off. There is a moment of revelation at the end, but it is fairly straightforward. The result is a slight novel that doesn't really seem to be about anything, but has more going on than first appears.

As an evocation of a particular point in Britain's history, the book is highly successful. David's characterisation seems under-cooked, but the surrounding cast are memorable and varied. The minutiae of holiday camp life is both humorous and nostalgic. The prose is restrained and elegant. The fantasy elements are very lightly added (to the point that it's highly debatable if this is in any way a fantasy book at all) but work well when they are evoked.

The Year of the Ladybird (****) is a quiet, slight, evocative novel. It is a well-written snapshot of a particular moment in time and works very well on that basis. Those looking for something more plot-driven would be advised to look elsewhere, however. The novel is available now in the UK and USA.
Posted by Adam Whitehead at 12:51

Email ThisBlogThis!Share to TwitterShare to FacebookShare to Pinterest
Labels: graham joyce, the year of the ladybird

Given your review I strongly suggest you read The Limits of Enchantment and Some Kind of Fairy Tale by Joyce. They are both superb and, from the sounds of it, offer everything you found attractive about The Year of the Ladybird with known of the reservations.

I still can't believe that you liked The Silent Land. I've read 8 of Joyce's books and it is my least favorite by quite a fair margin.

Thanks for the heads up that this one is now available, I have placed my order!