Last to Rise by Francis Knight

Mahala is under siege. The Storad are poised to storm the city and seize its monopoly on trade across the continent. The Archdeacon is powerless to stop the cardinals and other high-ranking members of the city's elite from fleeing. It falls to Rojan Dizon and his accomplices to find a way of saving the vertical city or seeing it destroyed. 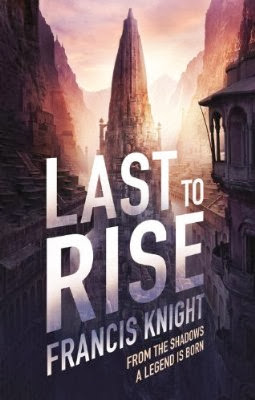 Concluding the Rojan Dizon trilogy, Last to Rise picks up on dangling plot threads from Fade to Black and Before the Fall and attempts to tie them together nicely in a suitably epic conclusion. It more or less succeeds. Character arcs are concluded - in some cases rather tragically - and the underlying social and economic problems of the city are used to fuel a transformative finale.

Knight continues to build on the successes of the previous volume: Rojan Dizon's character growth into a more mature individual continues and there is further development of the worldbuilding and feel of the city, which actually feels more like a place where people could live and work now than in the first volume, when it felt like a bit more of a painted backdrop. The magic system continues to be innovative and well-thought-out (and it's a nice twist that Rojan actually can't use anywhere near as much of it as the other, more inexperienced mages due to his own psychological issues). Where the book falters is its pacing and how it impacts on the characters. There's a huge amount of plot going on here and this pushes some of the supporting cast into the background. Most surprisingly, we still get very little in the way of appearances from Jake, one of the major and more interesting characters of the first novel, who has now been relegated firmly to the sidelines.

The ending of the novel is interestingly ambiguous, balancing tragedy with moments of triumph, and leaves things open-ended enough so that future books with these characters remains possible. But for now, this is a reasonably satisfying ending.

Last to Rise (***½) is a worthy conclusion to an intriguing debut trilogy. The book will be released in the UK and USA on 26 November.
Posted by Adam Whitehead at 16:12