Fantasy author (and well-known fantasy webmaster) Shawn Speakman's fantasy anthology Unfettered has been picked up by Orbit Books for a UK release next year. 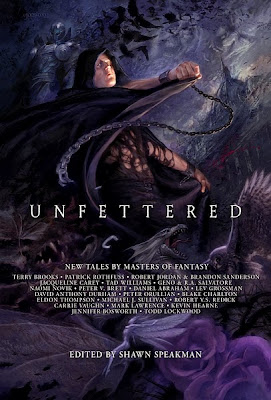 Unfettered features short stories by Patrick Rothfuss, Brandon Sanderson, Jacqueline Carey, Tad Williams, Naomi Novik, Peter Brett, R.A. Salvatore, Daniel Abraham and Carrie Vaughn, amongst many others. It was released last year in the United States to a good reception. Speakman created the book to help pay for his medical bills after suffering from cancer, with the writers making money back from foreign rights sales.

The UK edition of Unfettered will launch on 20 February 2014. Speakman is also working on a sequel to the book, currently untitled but planned for release in 2015.
Posted by Adam Whitehead at 20:26