More than seven months after being forced to flee Herschel's farm, Rick Grimes and the group he leads are tired, ragged and badly in need of shelter and a place to relax. Stumbling across an abandoned prison, they set about clearing it of walkers and turning it into a base of operations. Meanwhile, Andrea, separated from the rest of the group, has hooked up with a sword-wielding loner named Michonne (who uses 'neutralised' walkers - with their arms and jaws removed - to carry supplies). They find an apparent safe haven in the town of Woodbury, run by the apparently well-meaning 'Governor'. But it isn't long before Rick's group and the Governor's followers run into one another, setting the scene for a major confrontation and testing the loyalties of those in both groups. 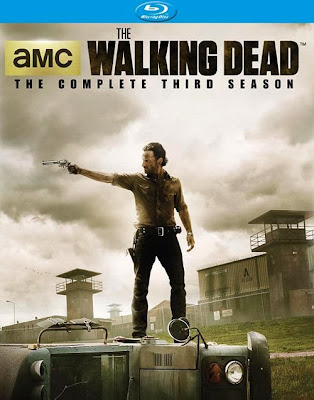 The Walking Dead is a contradictory series. On the one hand, it's often compulsive viewing. It's more ruthless to its characters even than Game of Thrones and Lost (the latter of which it is beginning to resemble more and more) and the show puts a pleasing emphasis on taking common sense precautions against the zombie threat (although it's not above using individual moments of implausible stupidity for dramatic gain). On the other, it often promises more than it delivers and the first two seasons both had a tendency to deploy filler material. The third season is an attempt to tackle these issues and play to the strengths of the premise whilst not getting bogged down so much. Unfortunately, this was sabotaged from the get-go by AMC's demand that the season be extended to sixteen episodes, which turns out to be about four too long.

The series starts off promisingly. The delayed discovery of the prison (which we saw in the final shot of Season 2 close to Rick's group but it's taken seven months of them going round in circles to get back to it) and the need to clear it out provides a lot of dramatic impetus in the early episodes. Splitting the group, getting Andrea and Michonne to Woodbury and a dramatic reunion with a missing former member of their group all provide strong storytelling opportunities. The introduction of the Governor, played with relish by David Morrissey, is well-handled and giving Rick a nemesis and someone to bounce off is a great idea. The first half of the season is indeed The Walking Dead at its best, featuring some rich scenes of character development and even some satisfying action scenes (even if the ease with which walkers are now being dispatched compared to earlier seasons is starting to get a little silly).

Things deteriorate rapidly in the second half. Some rather bizarre wheel-spinning kicks in and we get a face-to-face confrontation between Rick and the Governor which really doesn't do anything, as well a completely pointless episode featuring two characters playing cat-and-mouse in an abandoned warehouse. As more excuses are found to delay the big finale battle, things get less and less plausible until scenes that were supposed to be powerfully tragic become instead rather comical. There's also less focus on the day-to-day details of living with the walker threat; in the final episode people are casually leaving gates open and walking past biters without too much care. The second half of the season does retain some dramatic highlights, such as Carl Grimes graduating from 'pointlessly hanging-around kid' to 'PTSD-suffering child soldier' and the intriguing arrival of Tyreese (played by The Wire's Chad Coleman), but it's a far cry from the opening half.

Ultimately, the third season of The Walking Dead (****) is watchable, entertaining and features some very strong dramatic scenes and elements in its first half. The second half is more disappointing, featuring significant lapses in plot logic and characterisation. If anything, whilst the second season (which was a little too static) benefited a lot from being viewed in rapid-fire on Blu-Ray, the third season suffers, with the longueurs in the second half being far more incongruous than if viewed from week to week. The season is available now in the UK (DVD, Blu-Ray) and USA (DVD, Blu-Ray).
Posted by Adam Whitehead at 10:11