On his blog, R. Scott Bakker confirms he has completed the first draft of The Unholy Consult, the concluding volume of The Aspect-Emperor trilogy and the sixth book overall (of eight or nine, which remains to be confirmed) in The Second Apocalypse series. 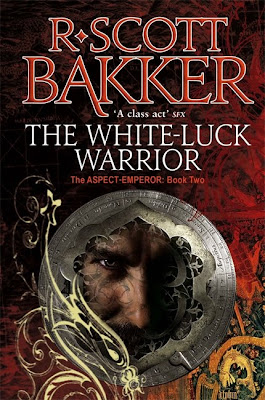 Extensive rewrites will now commence, with Bakker estimated that about a quarter of the book requires some attention. The current draft stands at 300,000 words, making it substantially longer than any other volume in the series (the previous-longest, The Warrior-Prophet, clocked in at 205,000). However that word count might come down in rewrites. Bakker also confirms that The Unholy Consult will effectively conclude the story arcs begun a decade ago in The Darkness That Comes Before, so that if the final sub-series is not written or published there may still be some sense of resolution in this volume (though I wonder if this is really the case).

With rewrites and editing still to come, a publication date for the book is uncertain. Late 2014 would appear to be theoretically possible, but 2015 may be more likely at this time. In his comments Scott suggests a possibility of the book being split if the length does not come down significantly. Let us hope this is not the case.
Posted by Adam Whitehead at 14:32

Woot! I've got to get back on the horse and finish reading the books that have already been published. I've read TDTCB, and it was a wonderfully challenging read.

I'll be honest, Bakker lost me with The White-Luck Warrior. At this point I don't intend to track down and read a copy of this one.

It's a shame since I enjoyed PON a lot and felt that The Judging Eye was a great start to a new series.

Really? I have to say that for me WHITE-LUCK WARRIOR was the best book in the series so far, and I found JUDGING EYE to probably be the weakest.

Though Bakker is nothing if not divisive ;)

His women treatment is absolutely shocking. After original trilogy i decided, that i don't want to read more about Esmenet. A prostitute becomes an empress is pretty same as a farm boy saves the world.

Well, that actually happened in history, her name was Theodora you may have heard of her. I don't think she was the only one either.

I thought that White Luck Warrior started well enough but then really went off the rails in the last 200 pages. Especially the Esmenet sections. Those chapters felt like Bakker responding to the misogyny criticisms by cranking it up to 11.

I'll be reading this one despite that. Let's hope it can seriously top WLW and TJE.

If you turn Cinderella into a prostitute, the story is structurally the same, no? Dirty, abused girl becomes princess?

I agree that Bakker's treatment of women in the series thus far is the opposite of progressive literature, but I would at least wait until the final book has been published before passing judgement. Perhaps Bakker has yet to make his point?

Can't wait for this, but don't like the idea of him finishing the whole arc in one book. I'd rather he took his time over another couple of books.


As long as he doesn't finish the arc and then come back with another tacked on story for book 7...

I really wish I could like Bakker, but his penchant for philosophical introspection/dialogue is tiring. And not really all that illuminating.

And I despise all the characters equally.

I've come to accept his Gary-Stuness. I want him to win, so everyone will just calm the fuck down and stop resisting.

I have a feeling that the third sub-series will never see the light.

Anyway, why haven't you reviewed Neuropath and Disciple of the Dog? Is it because you don't want to write anything bad about Bakker?

I didn't like NEUROPATH and gave up less than a third of the way into the book. I may attempt to finish it to review it, but probably not in the near future. I haven't gotten around to DISCIPLE at all yet.

Why are people always bashing Bakker when it comes to his treatment of female characters. Has anyone read City of Bones? That is a shameful and overtly stereotypical play on female angst. Bakker's characters, both female and male are flawed and real. Books like City of Bones >( Not every girl is jealous of an other's breast size. People sit around bashing Bakker and then make a movie out that crap.
I don't get it.

Agree. Why bash Bakker so much about his treatment of women?
This world is set in a medieval time context, and medieval times were extremely violent and, yes, misogynistic! - a male-dominated world.
It's part of the vivid realism of the world he so artfully immerses you into - yes it isn't 'progressive' literature as far as the empowerment of women goes, but that's what it was like; and is still like; in certain lawless third-world countries today.

Love every book in this terrifying and searingly original series so far. Have been seeking news on the Unholy Consult for years - so this is a welcome update.

I honestly could not agree more with the fact that this series is set in a time when women are second class citizens. Kellhus' choice of Esmenet, was simply because of her intelligence, and her proximity to him. I am sure that Bakker could have found a different way to bring an intelligent female character to Kellhus, however that wouldnt have allowed for Achamians hatred of Kellhus to be stoked the way it has.
In a world where women are second class citizens, how could anyone expect anything less than women being treated as such?
I have not finished White Luck yet, but I have NEVER been as excited, terrified, and truly glued to ANY book, as I was for the last chapter of Judging Eye, while they were in Cil Aujis.. MY EFFING GOOOOOOOOD! That was INCREDIBLE! How could any of you think otherwise?!?! I read it, then read it again, and then again!!!! It was UN-BE-LIEVABLE! and I absolutely love the way characters wax philosophical.. That IS WHO THE CHARACTERS ARE! It's what makes them so dynamic, and makes their decisions so concrete.
Unlike most authors, Bakker truly divulges to us the HEART of these characters. I literally would kiss the man if I could. I have never read a better series. Not ever.
I do wonder though, why I can not find the original series in print anymore?! Is it just pulled from printing in Canada? I just found this series, and I want to share it with everyone I know, but it took me weeks just to find a used book store with copies of it, and I want hard coppppiiiiess!!!!! lol. Sorry, I am currently in the clutches of that undeniable fanaticism that only happens after a truly engrossing read, and I can't get enough! :)

He finished the manuscript yesterday.

Terrific read. He captures the human mind quite well. I hope he finishes the entire series.

Best series I have read in a while right there with erikson ,esslemont,abercrombie,and martin.Bakker we all want a book by christmas 2014.And all the haters out there quit crying about his treatment of women . Anasurimbor kellhus wife esmenet his daughters and stepdaughter are all about as strong as they come. I agree with the other dude ,nyone ever heard of theodora.Bakker get crakin we need at least four more books

For all the people complaining about Bakker's treatment of women: portrayal of the plight of any given woman is not the same as promotion of that same circumstance.

How could you include Esslemont in that list? Although he has the benefit of great characters and a decent story, his writing is pedestrian at best.