In a surprise move, Andrzej Sapkowski's Polish publishers have confirmed that they will be releasing a new Witcher book (the eighth overall) on 6 November this year. The new book will be called Storm Season and will take place before the events of the five-volume novel series (currently being translated and published in English - with some criticism of the quality of the translation - by Gollancz in the UK). 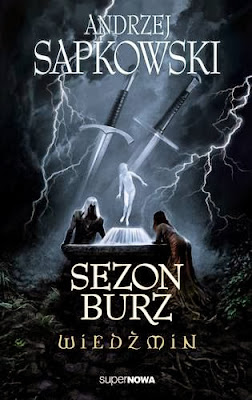 No word on when the new book will make it into English. The Witcher 3: Wild Hunt, the third computer game based on Sapkowski's world, will be released by CDProjekt next year.
Posted by Adam Whitehead at 18:46

I have hoped for this since I read the story of the Witcher. In Bulgaria all the books are published. This is great new for the fans, thank you!

So the egomanical old sod finally caved in? Ha!

I keep hearing about this series and how good it is, but am still on the fence about whether or not to read it. On one hand, good books! On the other hand, most of the people who tell me that they're good books have literary tastes that don't usually synch up with my own, and usually they tell me is that, "They're so good!" find that curious, since most of the time people who like a thing usually at least give reasons WHY they like a thing. I wonder if the series is actually that engaging that it's hard to pin down the whys and hows of liking it.