Gus Roberts is the star engineer at SMYLE, a new 6G broadband company operating on the south coast of England. In his spare time Roberts is also "the Truth Seeker," investigating paranormal activity on a low-key YouTube channel. When he gets a new engineer assistant, who goes by the improbable moniker of Elton John, and meets a strange woman hiding behind his house, his success rate in investigating the paranormal abruptly increases. 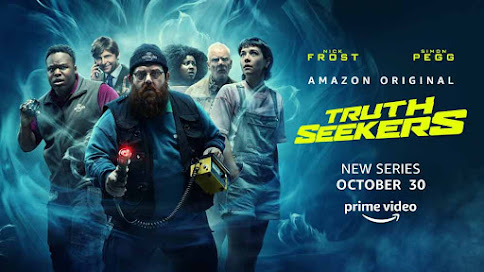 The combination of Simon Pegg and Nick Frost is a proven, winning one. Their 1999-2001 TV series Spaced (made in concert with Jessica Hynes) is one of the great British sitcoms, whilst their films Shaun of the Dead and Hot Fuzz arguably remain the two greatest British comedy films of the 21st Century (to date), with The World's End being a distant but still decent follow-up. However, all of these projects were also undertaken with the collaboration of director Edgar Wright. Pegg and Frost's work without Wright (particularly their 2011 movie, Paul) has been very patchy, whilst Wright's solo work (Scott Pilgrim vs. the World, Baby Driver) has been far more accomplished.

A non-Wright collaboration between Pegg and Frost should therefore be regarded with suspicion, but Truth Seekers makes this more of a virtue. This new Amazon series makes a strength of the absence of Wright's trademark superlative editing and frenetic fast-cuts, instead opting for a slower, more deliberate and, well, more British pace. Truth Seekers is a restrained show which mixes low-key comedy with unexpected moments of real drama, pathos and horror to an ultimately winning effect.

It takes a little while to warm up. The first and easily weakest episode is stiff, not particularly funny and at times strained. The episode sets up a long list of clichés, including protagonist Frost being sad about his dead wife, living with his doddering father (Malcolm McDowell, initially phoning it in but quickly perking up and bringing his A-game) and joining forces with a new, clumsy partner (Samson Kayo) and his geeky sister (Susie Wokoma). They are given jobs by SMYLE's boss, Dave (a restrained Pegg) which somehow manage to combine fixing genuine broadband connectivity problems with paranormal activity, mostly revolving around ghosts, souls unable to move on to other planes or becoming trapped on the mortal plane. An early investigation sees the team joined by Astrid (Emma D'Arcy), a strange pixie-like girl with a mysterious past who appears to have spontaneously accumulated from every single female Joss Whedon character ever.

The piled-up clichés rapidly start dissolving though. Each character has a carefully thought-out backstory and it's the combination of these backstories that makes the plot more interesting. The show also finds convincing ways of explaining why, after twenty years of frustration, Gus is suddenly inundated with real paranormal cases. The characters evolve in surprising and original ways, and the stakes of the entire series ramp up, with the apparently disconnected mysteries-of-the-week gradually building into tiles of a much bigger mosaic. Excellent supporting actors also show up, with Trainspotting's Kelly McDonald appearing as a possible new ally and The Mighty Boosh's Julian Barratt as a recurring foe.

Events culminate in a large-scale showdown which mixes in some existential body horror and real tragedy to the mix, as well as the inevitable cliffhanger for a second season.

Truth Seekers' first season (****) succeeds by virtue of not being another Frost/Pegg gag-a-minute geekpocalypse (helped by Pegg not being in it that much), instead being thoughtful and at times genuinely eerie thanks to some taut direction from Jim Field Smith. When it's funny, it can be very funny, but it knows when to play things for laughs and when to look for other emotional responses. Apart from that weak first episode, this is an accomplished series with an interesting tone, and it'll be good if it comes back for more. The first season is available now worldwide on Amazon Prime Video.