"Baby" is a young and talented driver. After inadvertently stealing a car belonging to master criminal "Doc", Baby finds himself employed as a getaway driver. His natural skill is enhanced by his listening to music (a way of dealing with tinnitus, a consequence of the childhood car accident that killed his parents). Having paid his debt to Doc, Baby is ready to start a life with his new girlfriend Debora...until Doc offers him one more job which will set him and Debora up for life. 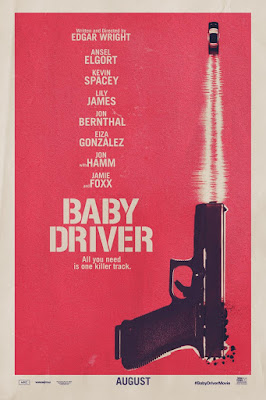 Edgar Wright is one of the UK's most interesting directors, one of the (surprisingly) few modern directors who has a style and energy that is immediately recognisable. That style was immediately obvious in his first project with Simon Pegg, the superb TV show Spaced, and carried on through their three films together (the Three Colours Cornetto Trilogy: Shaun of the Dead, Hot Fuzz and The World's End). But it went to 11 in his first Pegg-less movie, Scott Pilgrim versus the World, a hyperkinetic comic book movie which had a colossal amount of style, wit, charm and heart. Hell, it even permeated through his script for Ant-Man (even thought Wright was - ill-advisedly - removed from the movie as director shortly before production began).

Baby Driver is Wright's first movie as sole writer and director, and isn't based on any pre-existing property. It does draw, however, on his music video for "Blue Song" by Mint Royale (which gets a cameo appearance in the movie as a nod of thanks). It's a movie which combines its story with its soundtrack, with Baby (Ansel Elgort) using multiple iPods and different playlists to soundtrack his motoring adventures. Wright balletically choreographs the car chases so they run in time to the music and it's all breathlessly exciting.


It's also a little bit misleading: the low budget means this movie can't be The Fast and the Furious But Directed By a Brit and Actually Funny, at least not for any sustained length of time. Instead the movie diverts a lot of its run-time to exploring Baby's relationship with his foster father Joe (CJ Jones) and his new girlfriend Debora (Brit Lily James nailing - to these limey ears - a terrific Southern accent), soundtracking both storylines as well. There's also a great deal of tension between Baby and one of his fellow criminals, "Bats"(a menacing Jamie Foxx) as well as a reluctant friendship with "Buddy" (Jon Hamm), formed over their mutual love of Queen. Spacey shows up and gives a typically intense Spacey-esque performance, but there's some interesting twists in his character and he ends up going in a different (and less Spacey-esque) direction than you're expecting, which is welcome.

The film has a few issues, however. It can't quite sustain the vibe and energy the movie opens with, unlike Scott Pilgrim, and starts flagging in its second half. In particular, the female characters have relatively little to do (Eiza Gonzalez's female gang member doesn't get much to do, but does nail one of the best scenes in the film when she shoots down Foxx's character's macho posturing). James risks feeling wasted, especially after she learns about Baby's double life and rather than freaking out as expected actually steps up and starts playing a more prominent role in the story, only to fall back into a supporting role. The film also feels unsure in where it's taking Baby, with it being never entirely clear if he really wants to go straight or if he needs the buzz and energy of his driving. The gunfights in the conclusion feel a bit rote and the movie doesn't even have a concluding car chase, which is surprising.

Still, Baby Driver's first half is a masterclass of direction, editing and music: look out for a lengthy opening one-shot, a tip of the hat to Shaun of the Dead, which is subtle but impressive. Music lovers will also get a kick out of the huge number of music cameos in the film: Flea, Sky Ferreira, Big Boi, Killer Mike, Paul Williams and Jon Spencer are among those who make guest appearances. There's also quite a few good laughs (even if it's arguably Wright's least funny film, there's still a few laugh-out-loud moments) and some terrific performances.