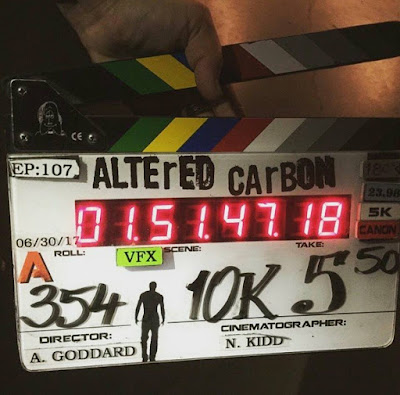 The 10-episode season will air on Netflix in February 2018. It stars Joel Kinnaman as Kovacs, James Purefoy as Laurens Bancroft, Kristin Lehman as Miriam Bancroft, Martha Higareda as Kristin Ortega,  Chris Conner as Poe, Alika Autran as Okulov, Tahmoh Penikett (late of BSG) as Dimitri Kadmin, Matt Frewer as Carnage, and Teach Grant as Jimmy DeSoto among many others.

The project is the second-most-expensive in Netflix's history, coming in only behind the second season of Sense8. It'll be interesting to see if Netflix can make a success of what will be the first major attempt to make literary cyberpunk work as a live action TV show.
Posted by Adam Whitehead at 19:22