Update on THE WINDS OF WINTER and FIRE AND BLOOD

After a very lengthy spell of silence on the subject, George R.R. Martin has finally provided an update (if a short one) on two A Song of Ice and Fire projects, including The One That Everyone Wants To Know About. 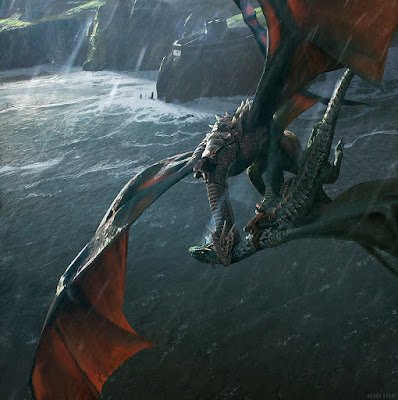 Artwork by Chase Stone, from The World of Ice and Fire.

No, The Winds of Winter is not done, and George confirms that completion is still months away, finally ruling out a 2017 release date. The good news is that George thinks that a 2018 release for the book is therefore more likely, but nothing is set in stone.

Interestingly, George also provides a update on Fire and Blood, the once-mooted "GRRMarillion" which was originally planned to come after the series was completed. This book draws on over 300,000 words of new material that GRRM wrote for The World of Ice and Fire, most of which was dramatically cut down in editing for the final book. With something like 80,000 words on the Dance of Dragons alone (from which the novellas The Princes and the Queen and The Rogue Prince have been drawn), this was always going to be a hefty project and, going through it, George and his publishers realised that it was going to have to be a two-volume project, with the first volume (containing well over 100,000 words, probably closer to 200,000) already effectively complete.

As a result, Fire and Blood: Volume I, being a history of the Targaryens from Aegon the Conqueror to Aegon III the Dragonbane, will be published in late 2018 or early 2019. Fire and Blood: Volume II, which will cover the period from Aegon III to Robert's Rebellion and the death of the Mad King, will follow several years later, presumably after A Dream of Spring is completed. This possibly means that the second half of the history will be a large larger and in more detail than originally envisaged, so for those who've been beginning for a prequel story about the Rebellion, this may be the closest you'll get (I also suspect this will have to follow Spring so George can give the full, "unedited" account of the war without having to worry about any more spoilers).

GRRM concludes his update by saying that we may therefore get two new Westeros books in 2018, if things go well (or maybe none at all, if they do not).
Posted by Adam Whitehead at 23:37

Email ThisBlogThis!Share to TwitterShare to FacebookShare to Pinterest
Labels: a song of ice and fire, fire and blood, george r.r. martin, news, the winds of winter

He was very vague on Winds, I have to say.
Absolutely nothing positive to deduce from that. It clearly isn't looking like it's finished soon.

The Fire and Blood news is pretty cool though. If that comes out in late 2018 we will at least have something, and it is an exciting book.

I would just like to thanks George for the update. He, wisely, locked comments on his site.

At what point does this guy sit down and realize that his excess traveling is causing him to have no hope of writing effectively.
I can appreciate him not wanting to write on the road, but that means surely, that he needs to stay home more?
Pretty pissed off that the show (Ed Sheeran...) is revealing more of the end game than the novels. Should never have come to this imo.

I wouldn't be surprised at all if there is nothing released next year.

Frankly, I've lost whatever interest I have in the Ice and Fire series. If it comes out, great and I'll get my copy from my local library. If not, I've moved on to other and better reading.

Pity, but I can't be expected to wait 21+ years for series to be finished.

Take a look at Peter F. Hamilton's Common Wealth series. Fantastic 7 books that actually have an ending. GRRM has had over 6 years to write one book? Please...

I'm trying hard to stay positive about this; it's an authors right to write what he wants when he wants to and if he chooses to spend 6 or 7 years between books, that's his right I suppose. (Although given how long the Meereenese knot took to solve, it's a shame there isn't a similar problem other than distraction that's lead to this delay).

Still, since the last volume was released I've discovered the Malazan novels, the Gentlemen Bastards and The Kingkiller Chronicles, and of course Tad Williams is back with a new series.

Who wants to put money on Tad finishing The Last King of Osten Ard before Winds of Winter hits the shelves? That would be ironic :)

The words of House Martin: "We Do Not Write"

17 years after the last good book in his series I have no hope anymore it will ever be finished. Martin clearly lost interest in the series a long time ago.

Yeah, years back I used to roll my eyes a bit at those who bitched and moaned about how long it was taking. But I've gradually turned into one of those people, to some extent. George seems like a great dude and I'm thankful for a few great novels and a really fun world that he came up with. He has a right to write and publish when he sees fit. I even tried to stay away from criticizing him about how he spends his free time, traveling or watching football or whatever. But man. It really is a bit much to see him publishing OTHER MASSIVE 'SONG OF ICE AND FIRE'-RELATED BOOKS THAT AREN'T PART OF THE MAIN SERIES. It's like, geez, really? What's next - finish Winds of Winter and then burn the manuscript live on the internet so no one can read it? I try to be understanding but I really don't understand writing and publishing other ASOIAF books when everyone's been waiting decades for you to finish this beloved series. That, and it fucking blows to be watching the end of the story on a tv show instead of reading it in GRRM's words. I far prefer the books to the tv show and it's a huge letdown that I'll be watching and not reading the end of this story. (I considered stopping watching the show once it passed the books but it's obviously pointless. The show is too big. You'd have to go live in a cave for 5 years).

I started reading ASoIAF from the beginning, I was in my late 30's. Since then a whole lot of life has happened and my children have grown up. My youngest was 8 when I started the series and he started reading it when he was 17. It's mind boggling to think that he is nearly 30 himself now and the series is still not finished. In the mean time I am already a grandparent and I will probably be reading the final instalment well into my 70's! That is if GRRM will still be writing into his late 70's. A lot of healthier and trim seniors than GRRM have had health issues crop up in their 70's. It would a great shame for him if it turns out that the HBO show will be the definitive on the series because he was never able to complete it.

P. C. Hodgell came out with her first Kencyrath novel 35 years ago. The eighth novel in the series came out last week. There was an unfortunate gap in time before and after the third book because of publisher changes, but she's been getting each novel out after 3-4 years otherwise. Each book furthers the overall story arc, which looks to have a definite end coming before too much longer, yet each tells a pretty complete story without bloating out to 800-900 pages. They're damn good. Do I mind that it's been taking so long? No way! Each new book rewards my patience.

If I could describe ASoIaF in similar terms I would be happy, but instead each book takes longer to come out, meanders further and further from the overall story arc, seems less focused but more wordy with each volume, and is being spoiled (unless it's not--who knows?) by a TV show that everyone talks about constantly, so events that might have been riveting and dramatic on the page come across as crass and sensationalistic. At this point I don't plan to but the remaining books, if they come out in what's left of my lifetime, and I'm not sure if I'd even check them out of the library. It really does seem like the author has lost interest.