Peter Parker is a New York school kid who has been bitten by a radioactive spider, developed powers and been recruited by Tony Stark to help out the Avengers with an internal dispute. Promised big things by Stark, Parker is soon dumped back in Queens with a badass spider suit but not much clue about what to do. Investigating an ATM robbery gone wrong, Parker uncovers evidence of a criminal gang selling weapons on the black market. With Stark busy with other projects, it falls to Parker - and Spider-Man - to tackle this threat on the streets of the city. 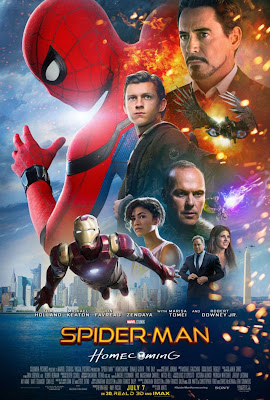 Oh yay, a new Spider-Man movie. We've had six Spider-Man movies in fifteen years - and sixteen Marvel movies in nine years - and this is the third reboot in that time, which feels a bit extreme. If there was ever a superhero movie which seemed utterly redundant before it even launched, it was this one.

Perhaps perversely, the film refuses to follow expectations and fall flat on its face. Instead, Spider-Man: Homecoming is comfortably the best Spider-Man movie ever made and is easily one of the very best Marvel movies. It's made with a surprisingly light touch, it blends genuine laughs (including the biggest belly laugh I've ever had during a Marvel movie) with a superbly-executed plot twist and, in Tom Holland, it finally finds an actor who can play both Spider-Man and Peter Parker excellently: Tobey Maguire was a fine Peter Parker but a subdued Spider-Man, whilst Andrew Garfield was a great Spider-Man but a firmly unconvincing (and way too old) Parker. Holland straddles both worlds, giving us the wise-cracking Spider-Man that cinema has been looking for but also playing the awkward, shy, teenage Parker to the hilt.

The film also gives us - in the Marvel Cinematic Universe, for the first time since Tom Hiddleston's Loki - a genuinely outstanding villain. Michael Keaton plays Adrian Toomes as an ordinary hard worker who snaps for a pretty damn good reason: being driven out of business as the head of a clean-up crew picking up the debris of the Avengers' big fight scenes after Tony Stark muscles in (and thus getting paid to clean up the mess he himself is responsible for). Toomes becomes an arms dealer, selling alien equipment (or left-over bits of Ultron) for profit, but it takes quite a while for himself to cross the line into more overt, lethal villainy and become the Vulture, one of Spider-Man's more familiar enemies. Keaton also gets the best scene in the film, a conversation in a car in which he very gradually pieces together clues to uncover Spider-Man's true identity, and it's a masterclass of acting and writing.

Some reviewers have drawn comparisons between the movie and the work of John Hughes, which is a bit of an exaggeration: the move nods to high school/teenage issues but doesn't spend huge amounts of time in that milieu. Instead, Parker's struggles to impress Stark and the Avengers, and vindicate himself as a hero (at one point near-breaking down as he claims - somewhat histrionically - that he has nothing else going on in his life), take centre stage, with nods at his love life, which is more hypothetical than real. However, the high school scenes are quite funny and there's some nice inversion of tropes. An attempt by classmate Flash Thompson to embarrass and bully Parker falls flat because Parker simply doesn't give him the time of time, whilst Ned (a memorable debut performance by Jacob Batalon), Parker's best friend, is quite funny in his quest to be Parker's "chair man" who helps him out from behind the scenes.

The biggest weakness is the typical Marvel one: a slightly muddled concluding fight sequence that is overly reliant on CGI and also a lot of CG stunts and moves which feel out of keeping with the more grounded, realistic feeling the movie is going for elsewhere. This is particularly notable as the film avoids replicating the soaring but obviously fake CG NYC transition scenes from the Sam Raimi movies (highlighting that Parker isn't there yet in his skill set), but in the finale has no trouble suddenly throwing the character around a ludicrously fake situation that should have kill him five times over.

If you can overlook that brief dip in form, Spider-Man: Homecoming (****½) emerges as a terrific slice of entertaining, being funny, emotional and well-judged on just about every level. It is on general release in the UK and USA now.
Posted by Adam Whitehead at 19:29