The Joker is dead and Gotham City has been enjoying a relative period of peace. Despite this, Batman is troubled. On Halloween these fears are confirmed when Scarecrow attacks the city with a deadly fear toxin. The city is evacuated, leaving behind predatory gangs, several of Batman's greatest enemies (including Penguin, Two-Face and Riddler) and a new threat, an army of soldiers backed up by drone tanks led by the enigmatic "Arkham Knight". Batman once again has to go into battle against his enemies...but this time has some help. 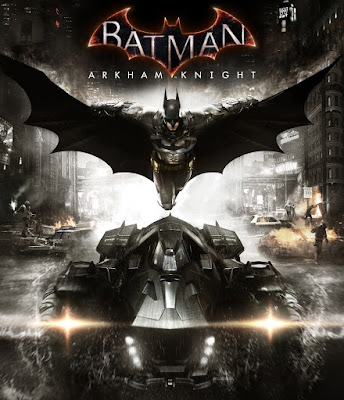 The Batman mythos have always been well-suited for a video game. Batman does not kill his enemies, meaning that more inventive solutions have to be found to defeat enemies, and he has a very large array of gadgets, locations and storylines to draw upon. It wasn't until the relatively unknown British studio Rocksteady released Arkham Asylum (2009) that a video game finally nailed the Batman character and mythos really successfully. The game featured a mixture of puzzle-solving, visceral combat and characterisation that worked very well. Arkham City (2011) and Arkham Origins (2013, developed by another team) expanded on these gameplay and plot elements and were even more successful, although they arguably lacked the focus of the original title.

Arkham Knight is Rocksteady's final game in the Arkham series. Whilst previous games were set in tighter, more constrained areas, Arkham Knight opens up most of Gotham City to explore. The game world is five times the size of Arkham City and Batman now has the use of the Batmobile to get around the city, in addition to his normal methods of running, flying (with his aerial cape) and grappling. As well as a central storyline exploring the state of Batman's psyche after the death of his nemesis and the war against both Scarecrow and the Arkham Knight, there are a lot of side-missions, some of them unfolding into elaborate storylines by themselves. There's also the regular array of Riddler mini-missions, lots of cuts scenes and an in-game codex explaining the backstory of the various characters that non-comics readers may not have met before. 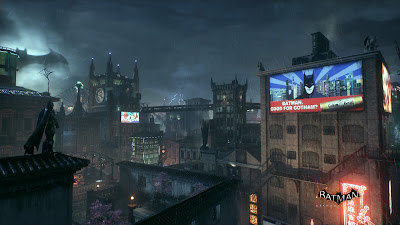 Veterans of the series will not find much here that they haven't encountered before. Batman has an array of fighting moves and gadgets that he can upgrade as the game proceeds, and has to pummel a pretty ridiculous number of bad guys into the ground to achieve his objectives. He also investigates crimes with a battery of CSI-style gadgets and with a number of allies, including Alfred, Oracle, Nightwing and Robin, who provide him with backup, advice and support.

It's a much busier game than any of the preceding ones, more of a true open world game with lots of things going on at once (and Alfred on hand to chide you if you neglect pressing tasks for too long) and you have to choose what you want Batman to do next. There's certainly a lot to do, and it's both the biggest and longest game in the Arkham series (a thorough playthrough will likely top 30 hours), the best-looking and, unfortunately, the most rambling.

Arkham Knight has more endings than The Return of the King. Each time the game peaks and reaches a crescendo after a massive set-piece battle or boss fight, it suddenly dissipates and a new threat rises. This happens several times in a row, adding an anti-climactic element to the game. The mystery of the Arkham Knight never really kicks in (mainly because the bad guy focus remains on Scarecrow, voiced with palpable malice by Fringe and, er, The Return of the King's John Noble) and the story goes way beyond plausibility when you have to take the Batmobile into battle for the fiftieth time against an entire division of robot tanks. Whilst it's great that the game draws on most of Batman's rogue's gallery to present a real threat to the Caped Crusader, there's also the Spider-Man 3 problem that there's probably too many villains: Scarecrow, Arkham Knight, Riddler, Two-Face and Penguin have a lot of time spent on them, so throwing in lesser-tier fodder like Pyg, Firefly and Deathstroke (not to mention a complex relationship with Azrael) ends up just feeling like filler. 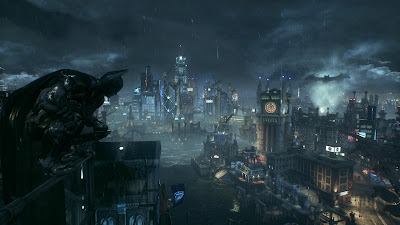 Much has been written about the Batmobile combat sequences and I have to agree they don't really work, at least not given the ridiculous amount of time you spend fighting unmanned tanks in the Batmobile. If the combat was better, faster-flowing and more natural (like melee combat), this would be bearable but instead it's clunky and superficial. A lot of the tank battles are optional and avoidable, fortunately, but for those completionists who want to 100% the game, they're not.

Melee combat is much better, improved over previous games and is more reactive, with a lot more moves and ways of using gadgets in battle (such as using an EMP disruptor to shut down gun turrets before jumping a group of guards). The familiar rhythm of blocks, counter-attacks and punches is something that Rocksteady has perfected by this point and is a lot of fun to play. The "predator challenges", where Batman has to take out a large number of enemies from the shadows, do feel a bit less accomplished this time around, however. They mostly take place on rooftops and it's harder to get stealth take-downs, which is more challenging but also more frustrating.

One area where the game does succeed is the psychological angle. By this time it feels like anyone could sit down and write a paper on Batman's mental state, but this game takes a fresh tack by having a mental representation of the Joker appear and comment on the action. Mark Hamill returns to give his trademark brilliant vocal performance and his observations on what's going on - sometimes lampshading some of the more ridiculous moments - are often quite cutting, and add an element of humour to a game that can be quite po-faced.

By the time I finished Arkham Knight (***½) I was more than ready for the game to end. For the most part, it's a fun game to play with some great combat, dialogue and set-piece moments (Batman's assault on a pair of dirigibles may be the set-piece highlight of the game). But it lacks the much tighter focus of the previous Arkham games, the Arkham Knight is simply too boring a villain and the over reliance on repetitive Batmobile/tank battles gets wearying after a while. The game is available now on PC, PlayStation 4 (UK, USA) and X-Box One (UK, USA).

Note: on release, the PC version of the game had considerable technical problems, to the extent where the game was withdrawn from sale for several months. Playing the game in July 2017 on an nVidia 1060 with 6 GB of Video RAM, I encountered no significant technical issues.
Posted by Adam Whitehead at 11:21