Emperor of Thorns by Mark Lawrence

Jorg of Ancrath now rules seven kingdoms and is one of the most powerful rulers on the continent. The time is coming when he will make his claim to the throne of the Broken Empire and try to unite the nations behind him. But there are forces gathering in the world which want to stop him. Powerful, ancient machines, like those that broke the world with their weapons of fire, are debating whether to scour the world of life and start again from scratch. The enigmatic Dead King has conquered the islands of Brettan and now marches on the mainland. This time, Jorg faces enemies that even he may struggle to master. 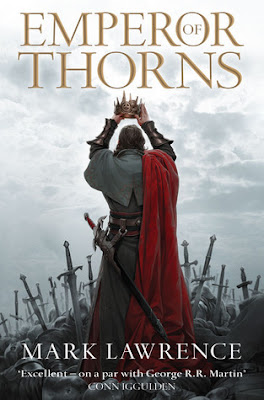 Emperor of Thorns concludes the Broken Empire series that started with Prince of Thorns and continued with King of Thorns. This trilogy tells the story of Jorg, a young man with the quick wits of Locke Lamora, the charm and resourcefulness of Kvothe but (to start with, anyway) the moral compass of Gregor Clegane. He has a rough loyalty to his men and those members of his family he doesn't want to actively murder, an unhealthy obsession with his young aunt and an inability to let any insult, challenge or threat pass unmolested.

Emperor of Thorns presents Jorg with his biggest challenge yet, although it's also one he's rather well-prepared to face. When Frodo Baggins reached Mount Doom, he didn't really have much more to hand than the clothes he left the Shire in, and had to face his destiny alone, apart from his plucky sidekick Sam. By contrast, Jorg of Ancrath reaches his fate in this book equipped with a neural link to a sophisticated AI and an orbiting array of satellites, in-depth knowledge of the world before the breaking and a magic sword. Although the odds are still against Jorg, I felt a surprising lack of tension in this novel, despite Lawrence's track record with both murdering major characters without much warning and throwing in interesting curveballs to the narrative. Some of these things happen here as well, but for the most part Jorg has a smooth ride across the continent to Vyene, and his ultimate destiny.

The novel alternates sections set in the present day, chronicling Jorg's ride across post-apocalyptic Europe, with sections set in the past, as Jorg has to travel deep into Africa to confront an old enemy and try to woo an ally. There's some interesting twists and turns here, but ultimately the flashbacks slow down the main narrative (this problem also afflicted King of Thorns). A "special edition Godfather" version of this trilogy which re-orders the flashbacks and present-day storyline into a linear sequence of events may be a worthwhile endeavour, and prevent the issue of Jorg apparently being out of his depth and incapable of handling the next challenge, but then a flashback reveals he picked up some awesome knowledge or ability four years earlier which means he can now deal with the problem.

At the same time, Lawrence remains one of epic fantasy's most interesting writers, of both prose and character, and Jorg develops in interesting ways in this book, leading to the conclusion being both logical and appropriate. A sequence set in a town that's been stripped of life is creepy and eerie and the concluding sequence in Vyene is appropriately blood-splattered, giving us back the uber-ruthless Jorg of the first novel. The first-person narrative means that some of the secondary characters are not as fleshed out as perhaps they could be (getting someone else's opinion of Jorg's activities from the outside would be interesting), but we do get to learn more about recurring semi-enemy Chella as we get chapters from her POV as well and discover more about the Dead King and his plans.

Emperor of Thorns (****) concludes one of the more narratively interesting epic fantasies of recent years with fire and wit, but it's grasp of structure and tension is not as effective as it could be. The novel is available now in the UK and USA.
Posted by Adam Whitehead at 10:09

I started off liking this series a lot but by the end of it I found myself somewhat unsatisfied by it. Jorg is a dick, plain and simple, and it's a bit hard to like him over the course of the story as he doesn't really stop being a dick. It put me off reading the follow-up series The Red Queens' War for quite a long time which was a pity because I found that series to be much more fun.