Jonathan Frakes, best-known as Commander William T. Riker on Star Trek: The Next Generation (as well as his more moralistically flexible transporter twin, Tom Riker), is returning to the Star Trek universe. 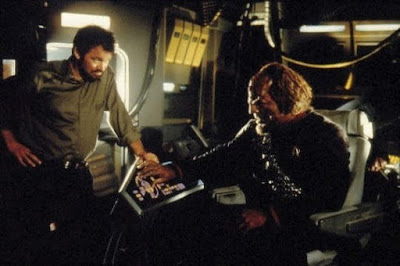 Both of these guys were offered a chance to return to Star Trek, but only one agreed.

Frakes has been tapped by CBS to direct at least one episode of the first season of Star Trek: Discovery. With the show well into production, Frakes has either already started work or his episode will be very late in the second half of the season (which won't air until after Christmas).

Frakes has directed fourteen episodes of the Star Trek franchise, along with two of the films (including the very well-received First Contact) and multiple episodes of other shows. His most recent credits include Falling Skies, Agents of SHIELD, Burn Notice and The Librarians. He is noted for his ability to find unusual angles to shoot familiar sets from and for a lean directing style, leading to his nickname "Two-Takes Frakes".

Frakes isn't the only Next Generation castmember who was offered a chance to appear on the new show. Michael Dorn, who played Lt. Worf on both The Next Generation and Deep Space Nine, was offered a guest role playing Worf's grandfather. However, he turned them down after they offered "less than one percent" of the fee for his previous appearance in the franchise, in the 2002 movie Star Trek: Nemesis.

The first half of the season will start airing on 24 September. CBS will be airing the first episode, with the second episode available immediately thereafter on CBS All Access; Netflix, which is airing the show internationally, will release both episodes together the following day.
Posted by Adam Whitehead at 22:00

A pity he made such a mess of the Thunderbirds. It could have been a great franchise. - Ian